Things SFians Like: The Difference Between “Real” Giants Fans And The Other 99.9% Of The City 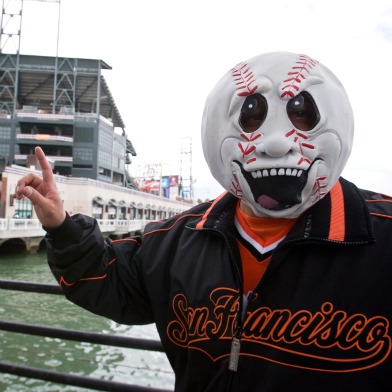 If there is one things that San Franciscans never cared about before and now care about a whole bunch that thing is their baseball team, the Giants.

You have never in your life known so many people who one minute were only interested in iPhones and bars and new media, and never said one thing about sports who are suddenly getting in fights with their friends because they NEED to have the Giants game on during their book club meeting.

Recently, I was reading an article by one of these real Giants fans (hint: they are all over the age of 50 and work at The Chronicle) in which the author stated that those who have just caught Giants fever MUST under all circumstances refrain from buying tickets to playoff games, and if they already have tickets should actually give them to a “real” fan, (a man over 50 who works at The Chronicle).

What kind of insane logic is this? Since when have the people who would most enjoy something been the ones who got to go it? Since never, that’s when. I know I would really enjoy taking one of Beyonce’s 25 yearly trips to St. Tropez, in fact I think I would probably get more out of it than she does, but am I going write an article about it? Yes, and this is that article.

Since when do “real” fans (i.e. someone who has been vaguely interested in the Giants at least one time before now) get to own fandom, and force new fans (people who just get excited about unusual and exciting things) to have to give disclaimers when they say they are excited about the Giants being in the freaking World Series? It’s just exciting. Sorry.

It’s almost as though the real fans don’t want the Giants to do well because all they care about is being the president of some super exclusive fan club.

So I’m just gonna say this right now: I hope The Giants kick ass today, and I’ll be watching the game from my book club. My name is Josie* and I never cared about the Giants until three weeks ago.

*some names have been changed to protect the innocent.