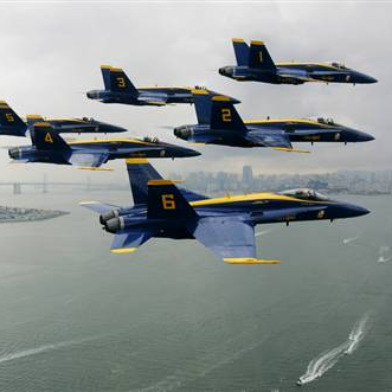 Like doing floor drugs at French Laundry, you never had a better or worse idea than heading down to the Marina to watch The Blue Angels on a beautiful Saturday afternoon.

It’s impossible to get there without going crazy and then walking the whole way. By the time you are finally allowed on the 22 the driver warns you that instead of his regular stop 20 blocks closer to your destination his last stop will be Sutter. It doesn’t even cross your mind to question the stop change, since in the language of Muni the question is seemingly never “Why?” but always “Why not?”

You stay on the bus against your better judgment, and because you don’t know how far Sutter is, and you think you might be about to gain 6 blocks. Two blocks later the bus stops and everyone gets off.

Thousands of people are descending on the Marina now. As on the Oregon Trail, some have stopped along the way too fatigued to go on, and like Pacific Heights enough to want to set up shop on the sidewalk and watch the show from there. These people seem both more relaxed and more into the Blue Angels than you, and this makes you both less relaxed and inexplicably more into the Blue Angels.

Down down down the hill you go. You hear a crack, but when you look up, the sky is empty. The booms can only chase the planes around the blue.

The sounds are unnerving, and you think that for a lot of the world the response to fighter jets is not to climb onto a roof and get wasted. Even for you the sight of a United Airlines passenger plane weaving oddly close to the Golden Gate is more alarming than it might once have been.

And then, coming in low over Marin is a cluster of black specks. You watch their approach, two breaking off, and the other four zooming over your rooftop. They are impossibly close to each other, close enough to, for the first time ever(?), warrant the use of the exclamation “Tight!”

At that moment you feel weirdly good about America, not least because of your place in it.