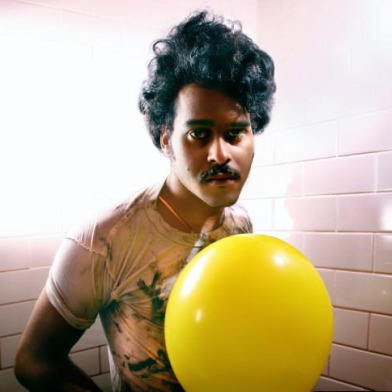 This track sauntered into my “most played” about a month ago and has been squatting there ever since. Others have tried to nudge it toward the revolving door (“there’s only room for so many of us, you know”) but its center of gravity is very low. Still no budging.

In these digital times, each week of which brings a deluge of new music, this demonstration of persistence is enough to validate (at least in my warped adolescent perspective) use of the phrase “stood the test of time.”

“Tether Beat” is an incredibly successful song in just about everything it tries for (some will accept the sincerity of these hyper-lovelorn lyrics, some will not), and it is nothing if not a masterpiece of percussion and production. A good ratio of electronic and acoustic drumming evolves along with the song’s structure, seamlessly housing the steady addition of new elements – touches of guitar and synth – and kicking into gear to underline the chorus’ emotional effort.

The aesthetic might be likened to a mid-career Peter Gabriel. The tones are largely warm, yet there’s a distinct sparseness, loneliness, even eeriness. The low croon (in which I do detect a British inflection, though George Lewis Jr., the man behind Twin Shadow, is from Florida) is most certainly of a type. “Suburban ghost dreams that sound like a slow motion shot of a cannon,” to quote from Twin Shadow’s myspace.

This brings me to my SPOILER ALERT: do not read anything on Twin Shadow’s myspace or any other press on this band if you do not wish to discover that Lewis embodies the Brooklyn Twentysomething Artist to a comically irritating extent. If I may indulge, Rolling Stone reports: “actual age? ‘too young to die,’ he says.”

If the persona that Lewis has supplied the media with is a sincere one, he clearly takes himself very, very seriously. My recommendation is that you swallow hard and enjoy the remarkably mature and sophisticated composition that makes “Tether Beat” such a keeper.

Listen to Tether Beat on Soundcloud.
Or the whole darn album (definitely worth seeing all the way through) on Twin Shadow’s myspace. It’s called Forget.