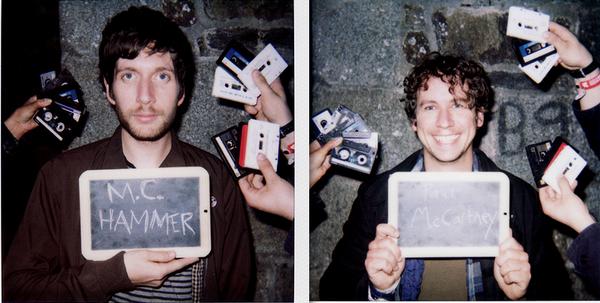 There’s always some cognitive dissonance when a band you became intimate with – whose music you etched into your eardrums (the decibel count at those No Age shows was probably enough to make that statement literal) – suddenly takes two big steps away from their old sound.

So as I waded into Everything in Between, No Age’s sophomore, the ghost of Nouns was all obtrusive. “Dude, this sucks, right?” It took a handful of listens before the specter was finally driven off. And he was totally wrong.

Nouns, No Age’s 2007 debut, was refreshing in its resurrection of brash L.A punk spirit and its singular use of the guitar (looped, heaped with distortion and fed through a smorgasbord of other pedals) to build soundscapes ranging from gritty to lonely to serene.

Everything in Between keeps these sonic gestures but subordinates them in the service of tighter song structure: focused melody, audible vocals, choruses that actually get returned to, and the like.

The beast has calmed down enough for you to make steady eye contact with it.

“Glitter” runs on a rock-solid cheer-chant drum line – a far cry from Nouns‘ relentless symbol-smashers. The guitar is tweaked, degraded, made to gurgle and shriek the most sickly, otherworldly sounds and then sent into orbit with along with a clean, melancholy-melodic fill around singer/drummer Dean Spunt’s thin but now unabashed vocals.

“Depletion” is a song you can definitely fucking mosh to. Picking up right where Dinosaur Jr. left off, it offers a healthy dose of noise procured through more conventional alt-rock/punk methods: power chords overlayed with a melodic lead. Definitely a song to be put on repeat – but that can be said for the whole damn album.

Listen to “Glitter” on Hypemachine.
Listen to “Depletion” on The Cluh.
No Age’s tour is going to Europe for now, but stay tuned for their eventual return.