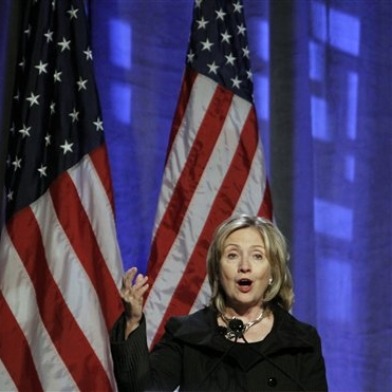 Hundreds of San Francisco residents listened to Secretary of State Hillary Clinton speak tonight about how technology could change world politics and how the Bay Area is helping accomplish that goal.

“One aspect of what we’re doing to promote diplomacy and development that is quite new and has special relevance for Bay Area and Northern Californians is our emphasis on innovation and our use of technology,” she said at a Commonwealth Club event at the Marriott Marquis in San Francisco’s South of Market District.

Women at Twitter and other Bay Area companies, for example, are helping Muslim women worldwide gain new-technology skills thanks to a program called Tech Women, which brings women from Muslim communities to Silicon Valley, Clinton said.

“Women from these Muslim communities will spend five weeks gaining skills and experiences here in California,” she said.

She also discussed the influence technology has had on changing public policy around the world, including in what she called “closed societies,” or communities that typically repress free speech.

“Earlier this year in Syria, young students witnessed shocking physical abuse by their teachers,” she said. “A decade earlier, the students would have just suffered those beatings in silence, but these students had two secret weapons: cell phones and the Internet.”

The Syrian students recorded video of the abuses and posted them on Palo Alto-based Facebook–even though the website is banned in that country, Clinton said.

“The public backlash against the teachers was so swift and vocal that the government had to remove them from their positions,” she said to a round of applause.

“That’s why the United States and the Obama Administration is such a strong advocate for the freedom to connect.”

“I’m well aware this is not any silver bullet, and these technologies can also be used, we are learning, for repressive purposes,” she said. “But all over the world we see their promise.”

Clinton participated in a talk following her speech during which she answered questions written by Commonwealth Club members and others in the audience.

Among the issues discussed were struggles in Pakistan and Afghanistan, and the U.S. struggle for clean energy.

Although she supports clean energy, for now, she said, “We’re either going to be dependent on dirty oil from the Gulf or dirty oil from Canada.” Several people booed at her comment.

Clinton said at the beginning of her speech that this was only her third time speaking in the U.S. since becoming Secretary of State.