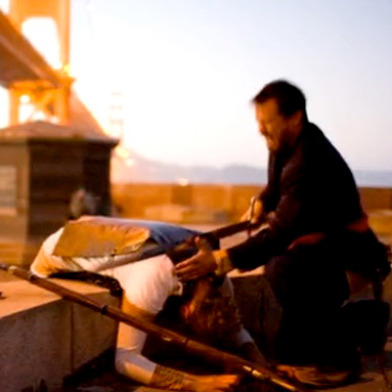 Calling We Players’ production of “Hamlet” a play is like calling Avatar a movie. Before my former-English-major cohorts make fun of me for comparing Shakespeare’s masterpiece to Cameron’s 3-D Pocahontas-cum-aliens extravaganza, let me explain: I loved Avatar, and I feel like it’s irrelevant to judge it by the standards which one would usually review movies (plot and character development, etc). We Players’ “Hamlet” is not a perfect production in terms of traditional theater criteria, but the show is an experience that transcends the normal definition of the medium.

When I first heard about the show, I assumed it would be a regularly-staged play set on the Rock. Then, I got an email warning me to wear comfortable shoes because I’d be walking about a mile and a half for four hours all over Alcatraz, including parts of the island that are normally closed to visitors. We Players’ director, Ava Roy, says the play “fully inhabits The Rock,” and she is not lying. Her production of ‘Hamlet” completely turns the normal theater-going experience around: the scenes don’t change for you. Instead, you change the scenes by walking – and sometimes running – through ominously echoing hallways, in and out of empty rooms framed by windows with shards of glass still stuck to their broken edges, and up and down pathways shrouded by jagged, thorny plants that wouldn’t look out of place in the post-apocalypse.

We Players has been transforming public spaces into “realms of participatory theater” since their inaugural 2000 production of “Romeo and Juliet” at Director Ava Roy’s alma mater, Stanford (the opening fight between the Montagues and the Capulets was set in the student cafeteria). Since then, We Players standouts have included “Macbeth” at Fort Point and “The Tempest” on the Albany Bulb. “Hamlet” is Roy’s most ambitious production yet: the show, which runs until November 21st, is part of an artistic residency on the island that began last year and extends through 2011.

I asked Roy what came first: did she know she wanted to produce “Hamlet,” or was she set on staging a show at Alcatraz? “Actually, this is the first time we were invited to produce a show,” Roy told me. “After [National Park Service’s Alcatraz site supervisor] Amy Brees saw my production of “Macbeth,” she told me she would love for us to consider working on Alcatraz.” “Hamlet” came to mind instantly, Roy said: “As I dug into the text, it kept revealing layers and layers of perfect connections, especially the question of conscience and consciousness, which seems to me like one of the most fundamental struggles of being both a person in the world and a person of captivity. The space chose me, and “Hamlet” chose itself.”

You’re rarely told what direction to walk in: instead, you’ll follow Horatio as he backs away from the Ghost of Hamlet’s Father or Laertes as he storms off in search of Hamlet. You’re often led by silently smiling We Players aides dressed in red and holding the lanterns that light most of the scenes. Sometimes these “scene changes” break the play’s delicious tension and take you out of the action; but most times the transitions are jarring in a good way. Which is why I’ll say again: this is not traditional theater. And if you’ve never seen “Hamlet” before, you’ll probably be extremely confused as to what’s going on most of the time. My first instinct was to recommend the production exclusively for Shakespeare lovers and all-around theater nerds, but Roy said she gets great feedback from first timers. “My hope is that it’s both comprehensive enough that people who have deep appreciation and experience can consider it a successful attempt,” she told me, “but one of the responses I often get that really thrills me that the show makes Shakespeare fun and accessible, even for kids. You get the energy, the quality, and the overall story, even if you don’t get all of the verse.”

As a theater nerd myself, I know how much work goes into blocking a scene on a fixed stage, much less on a prison on an island (which is also a bird sanctuary most of the year – Roy told me they couldn’t rehearse in some areas until a week before the show opened!). I was blown away by the stellar execution. A few times I felt that scenes were awkwardly cut off, which usually garnered laughter from audience members who would have otherwise been chilled by the action, but the blocking was absolutely exquisite. Ophelia descends into madness in the old prison’s hospital, intertwined in yarn, bird feathers, and bones (which Roy said was a nod to the sanctuary, as well as to “Hamlet’s” general themes of flight), characters search for the Ghost of Hamlet’s Father through crumbling stone archways and up into the island’s spiky hills, and at one point the audience walks past a chilling chain-gang tableaux. I could go on and on about the blocking, but I don’t want to ruin any more surprises.

I had mixed feelings about the cast: some actors were wonderful (Scott Phillips as Claudius was superb – thinking about his evil laugh still gives me the creeps a few days later). I usually find glaringly obvious gender role reversals distracting, but Andrus Nichols, the actress that played Hamlet, was so great that I didn’t really mind that the part of a young man was played by an older woman. The ensemble was very strong – everyone stayed energetic and in character throughout the four-hour production, which is crucial when there’s not just a stage to fill. Other actors were, well, not so good. I’m loath to point out actors I didn’t like because, as I said before, We Player’s “Hamlet” is more about the experience than anything else.

As a theater-lover who’s been lucky enough to see a number of excellent Shakespeare productions all over the world, I can’t say that this was my favorite production but it was definitely the most memorable. I don’t think I’ll ever forget the feeling of standing behind bars in a tiny cell, listening to Hamlet ponder, “To be or not to be?” while the lights of San Francisco twinkle in the not-that-far-away distance, both gorgeous and haunting.

Alcatraz must have been such a painful place to be imprisoned; I can’t imagine how torturous it would feel to be trapped so tauntingly close to all that Bay Area hustle and beauty while knowing you’d never take part in it as a free person again. It made me think about how trapped Hamlet feels throughout the play, so impenetrably imprisoned in his own thoughts while everyone around him goes about their daily lives. Yeah, deep. I still stand by my feeling that this “Hamlet” is more about the experience than the “theater,” but there is much to be said for experiencing the themes of “Hamlet” in a visceral way. I highly recommend it.

The show, which runs until November 21, is sold out, but unclaimed reservations are released to those on the wait list,which you can join here.