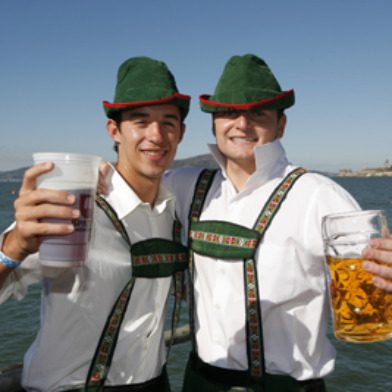 Before I divulge all the best spots to check out Oktoberfest this year, here’s a bit of the history behind the popular German holiday. The original Oktoberfest celebration marked Bavarian Crown Prince Ludwig’s marriage to Princess Therese on October 12, 1810. Everyone in Munich gathered for a five-day celebration over much beer drinking, horse races, and general revelry. Since then, Oktoberfest has morphed into an international call to beer lovers, and was eventually moved to late September when Bavaria experiences particularly pleasant weather. Kind of like in San Francisco.

Here’s the important part- Oktoberfest is not only an event dear to our hearts, it’s also a specific style of beer. The traditional German brew is an amber-copper lager of about 5.5% ABV, that has been lagered at least a month. It has full-bodied, rich, and toasty flavors that make beers like Spaten famous for their balanced palette. At Oktoberfest in Munich, beer is served in giant liter mugs and tipsily enjoyed while watching horse races and live polka bands.

But if you can’t make it to Oktoberfest in Germany this year, don’t despair. There are plenty of spots in San Francisco to fill-up on bratwurst and celebrate the 200th anniversary of this infamously drunken holiday. Although you won’t be surrounded by 6 million beer swigging festival-goers in Munich (it’s the largest beer festival in the world!), you can always pretend with a good pair of leather shorts and a glass boot filled with the finest German brew.

Where to celebrate in SF:
Oktoberfest by the Bay – The largest Oktoberfest in San Francisco is happening all this weekend at Pier 48. There’s a 21 piece polka band, dancing, beers in boots, and many a German call to drink.

Suppenkuche– This delectable Bavarian restaurant brings out a special selection of festival beers on tap until Oct 2 served in traditional glass boots!

Gestalt Haus – If you are looking for steins slung in a relaxed atmosphere, look no further. Their motto says it all: ” Beer, Brats and Bikes.”

Schroeder’s– Check out this historic restaurant, which has been in SF since 1893. They are hosting their own Oktoberfest on Oct. 1st and yes, there will be polka there too.

Walzwerk – Try their potato pancakes and vegetarian schnitzel (no that’s not an oxymoron), or any other of their authentic East German fare.

Monk’s Kettle– There’s a number of excellent German beers on tap, including the rare Rauchbier variety that includes smoked malts.

Schmidt’s – If you have a hankering for German vittles, go here! I’ve heard the potato salad is divine, and there’s a nice selection of German beer to go with it.