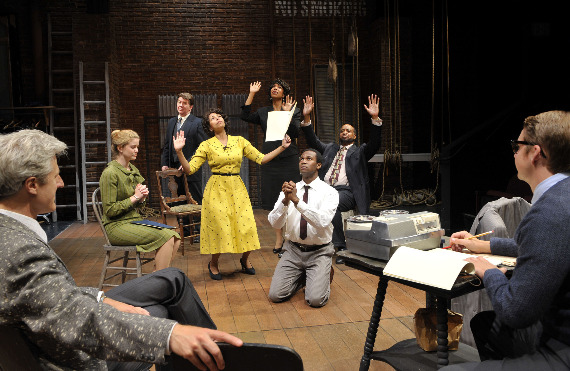 There’s a moment about halfway through Aurora Theatre‘s stunning production of Alice Childress‘s seminal Trouble in Mind that perfectly encapsulates everything the show is trying to say. Trouble in Mind is the story of a group of actors in the 1960s during the rehearsal process for Chaos in Belleville, a Broadway-bound, anti-lynching drama set in the south. The white director, Al Manners (Tim Kniffin), is coaching his black leading lady, Wiletta Mayer (Margo Hall), through a plaintive song her character is sings after her son is carried away to his certain death by a lynch mob. After she sings the song beautifully on her first attempt, Manners asks what her real emotions were as she was singing–she replies that she doesn’t know. After a few minutes of prodding, Wiletta starts getting in touch with the injustice behind the song and sings it again, but this time as a forceful expression of rage rather than a meek plea for the audience’s pity. This scares Manners so much he instructs her to sing it the original way and “not to think anymore.”

In a lesser play, Manners would be a straightforwardly prejudiced, mustache-twirler of a villain and his attempt to prevent the actors from valiantly expressing the brave, anti-racist message of Chaos in Belleville would be the crux of the play’s plot. In actuality, Manners is much more complicated than that and the real problem is that the show they’re putting on is exactly that type of lesser play–it’s poorly written, its characters are crudely-drawn stereotypes and its plot borders on the nonsensical but, as an explicit condemnation of racism, at least its heart is in the right place.

What’s wonderful about Trouble in Mind is that it’s constantly asking you questions and, as soon as you think you have them answered, it casually reveals another piece of information making you reconsider everything you thought you knew about a character, a relationship between two characters or even the play itself. Director Robin Stanton’s masterstroke is cutting the ever-shifting dynamics by playing up the show’s laugh-out-loud, biting humor. Even though the Childress’s script is endlessly clever, seldom does Stanton’s production beat you over the head with its own cleverness.

The cast is uniformly terrific, with Kniffin and Hall doing a majority of the heavy lifting. Hall has a certain inscrutable quality that was a hindrance in Intersection For The Arts‘ occasionally captivating, but generally uneven, production of Chinaka Hodge’s Mirrors in Every Corner earlier this year, but is perfectly suited for her role here. Hall plays Wiletta like someone so well-practiced in being a blank signifier, letting each person with whom she interacts see her as whatever they want her to be, that when she finally stops repressing her true feelings, it’s the type of jaw-dropping explosion that sucks all the air out of the room.

During its initial 1960s run, Trouble in Mind had the opportunity to be the first show written by an African-American playwright to run on Broadway, under the condition that Childress change the ending–something she was unwilling to do. Not to take away from Childress’s artistic vision, especially since the impossibility of wringing truth from a piece of art based on a convenient fiction is the whole point of the play and, had she acquiesced to the producers’ changes, she may have spontaneously combusted from all the irony, but the producers may have had a point. The show is so deft at keeping you off balance that, at the end of the show, when the prejudices of the all the characters are made explicit, it seems a little trite for a play which, up to this point, had been awash in mannered subtlety.

This isn’t to say that Childress, easily one of the best writers of her generation, didn’t know exactly what she was doing. At one point, one of the characters states that they abhor overly didactic theatre and hate when plays beat you over the head with a message–but the line is played for a joke because the subtlety the character is defending is Chaos in Belleville‘s ham-handed sermonizing. Childress is willing to throw out subtlety here because she believes the point she’s trying make, that the desire of white liberals to fight on the behalf of African-Americans is often borne more out of a desire to see themselves as heroic saviors instead of any real belief in equality, is so deathly important that she doesn’t want anyone to be able miss it, no matter how much they might want to.

The ending here doesn’t entirely spoil the fun because it allows any company that does the show justice, and Aurora’s production does it a good bit more than that, to have a play that’s simultaneously funny and sad, warm-hearted and callous, subtle and didactic. It’s a rare feat and, even though Trouble in Mind may have not made it to Broadway, we should all be glad that it made it to Berkeley.