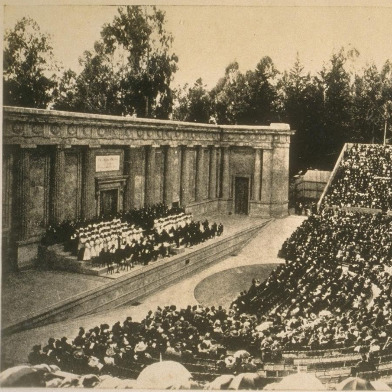 I was there on a full-ride scholarship (free tickets) last weekend to see Vampire Weekend, which for some reason both me and my male companion (my boyfriend not my manny) were vaguely embarrassed about so that while headed over on the BART we felt compelled to keep saying, in awkwardly loud voices, that it was great to have these, “FREE TICKETS.”

Which probably caused the other passengers, who presumably weren’t going to see Vampire Weekend at the Greek, to feel better and better about that decision.

Upon our arrival in Berkeley we promptly got lost, and bought some Sour Patch Kids, but obviously not in that order. We chose a meandering route through campus that took us past several socials and an oboe player. I resigned myself to the fact that we would be lost for all eternity, but then remembered my meditation and Zen’d out, and all of a sudden, somewhere between one breath and another, we arrived.

There’s literally no way to describe your first sexual experience, and that would be off topic, so what I’ll describe instead is the awesomeness of your first time at the Greek Theater. As with Megan Fox, the name is a pretty apt description of the thing.

With its steeply sloped concrete bleachers, majestic columns, and breathtaking views it looks like the exact same place The Oresteia was performed. Even the concert-goers contributed to the feeling of being at a classical revival workshop, their faces awash in the ethereal colored light favored by Beach House, a band that I’ve always nodded appreciatively at the mention of, but have in reality never listened to until last weekend, when I realized I should stop nodding appreciatively.

One wonders why Berkeley students, who appear to already attend class and/or live in buildings styled on Italian villas would need to have a world-class amphitheater on campus, but they do, and by the looks of things they love it.

We sat on the wonderfully plush grass above the seats, and it was so steep that we kept slipping down, only noticing when we turned around to see our airplane bottles of Jack Daniels silhouetted on the horizon like a camera you drop while snowboarding, and then go back for.

Vampire Weekend was fine and hyper-local in a way I would really appreciate if I were a rich dude from Nantucket. My boyfriend, a Southern gentleman, looked aghast when they asked, “Is your bed made? Is your sweater on?”

As soon as you get indignant that Vampire Weekend asked about the status of your Polo it’s time to leave the Vampire Weekend show you chose to go to. So we did, and scurried back to BART feeling good about the warm-up. We’ll be back on Saturday for Arcade Fire.