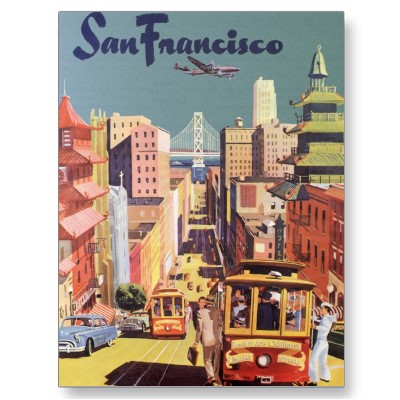 There is almost no person who lives in San Francisco who will call themselves a San Franciscan in mixed company.

This is for a few reasons, the first being that the average San Franciscan has only lived in San Francisco for 3 days, and the incubation period for Friscanism is something like 35 years, with the caveat that at least two generations had to be born within the city limits (not unlike a Bold Italic story) and not in Richmond or Pinole or some other completely ridiculous place like Berkeley.

The other reason is that there is a certain amount of street credibility inherent in the simple fact of being from somewhere else. You might think that the rarity of meeting an actual “San Franciscan” (“Did you see it? The one in the jeans!?”) would make the designation of ‘native’ a sought-after title, but this isn’t New York so it doesn’t work that way.

Everyone you meet in San Francisco is champing at the bit to tell you how they’re not from here, and will try to insert their own place of origin as often as possible:

“Do you know where the bathroom is?”
“I’m from Eugene.” (Which you shouldn’t necessarily take as a ‘No’)

This is like a siren’s call to other people from Oregon, and someone nearby will be obligated to ask if this person perhaps knows their cousin’s cat Misty.

This whole ‘do you know someone from your own town’ game takes like three times as long as it needs to because the asker is always super coy and weird about it, and keeps snuffling around the question like a dog who just found a tupperware in my purse.

Everyone wants to be from not here, and honestly, pretty much everyone is from those places. Because your odds of not being from San Francisco are pretty good, in fact they are: Every Place In The World to One Place (San Francisco).

It’s weird because when someone tells you they’re from Manhattan they seem cool, but when someone tells you they’re from San Francisco they seem like they’re lying. Of course, this might be due to the fact that we’ve all seen Kids, so we know exactly what it’s like to grow up in New York, but we’ve hardly ever seen even one lower-case kid in our own fair city, so we kind of don’t believe it ever happens here.

The growing up, I mean. And really, if you spend any time in bars, you know it doesn’t.