Things New Yorkers Like: Writing About SF In A Patronizing Tone 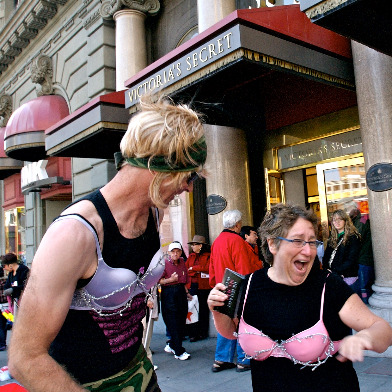 “[San Franciscans] have clothes, but they wear them in private.”
— Miguel Lopez, owner of “default outfitter to the Castro tribe” Sui Generis, quoted in the New York Times

There’s almost nothing New Yorkers like more than writing about San Francisco in a patronizing tone that suggests our city is their city’s half-brother who decided to go to art school for glass-blowing.

If we were to distill the recent New York Times article, “The Tribes of San Francisco” into its basic components it would read as follows:

You won’t find a San Franciscan wearing Ernest Shackleton’s old parkas to a meeting of their local chapter of the Cult of Tory Burch, although they will wear overalls to Nopa, so they can go straight from there to ironically watering a Traina’s lawn. Tartine is the Sistine Chapel of dessert, and girls in the Mission work there while wearing gingham onesies with more aplomb than your typical infant. It’s not that people in the Bay Area don’t have closets bursting with Phillip Lim, it’s just that they wear him in private, going by the age old adage “naked in the streets, couture in the sheets.”

For a San Franciscan, clothes are for private time, or to put it in a way that even a New Yorker could understand, “Fashion” doesn’t get a “Night Out” in San Francisco.

This goes a long way toward explaining the preponderance of public nudity in our fair city.

It’s not that San Franciscans love to be naked, but that we literally cannot wear clothes in public for fear of a violent backlash against the $20,000 McQueen capes we all have.

While the Times author dances around the issue, talking about San Franciscans’ distaste for hype, inability to wear things that are difficult to put on (thus the popularity of the onesie), and the fact that we spend most of our lives in our cars (?), I think what he was trying to say, and what Anna Wintour has literally been hinting at for decades, is that from our “velvet equestrian hunting caps” to Nicholas Ghesquiere-esquiere kite-surfing ensembles, San Francisco is the most fashionable place on Earth.