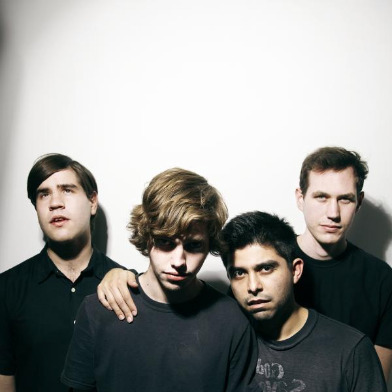 Something has definitely happened to Abe Vigoda since their 2008 debut. Let’s call it maturity (at this point it should be clear that I am not referring to this man).

Not to belittle Skeleton – a merry, raucous stampede of shouting, liberal percussion and a peculiar tonality initiating the tag “tropical punk” – whose splash displaced more water from the indie pool than early listeners would have expected.

I merely mean to say that by comparison, Crush (their upcoming LP) demonstrates a technological expansion (hey synth!), a replacement of mania with melodious restraint and a compelling dialogue with the musical tradition before them – 80’s post-punk/new wave (hip hip!) and Arthur Russell (hooray!) for instance. The tropics have frozen over in the best possible way.

This song, “Repeating Angel,” constructs a pensive, emotionally focused soundscape out of disciplined guitar picking and echo drum effects that – call me crazy – struck me right off as something out of U2’s The Joshua Tree.

Enter some moody-melodic, wise-old vocals that will surely have you wrongly guessing its owner’s years. The song’s emotional levees break at the chorus with the emergence of a sure-fire synth line and some amped up kick drum to issue in the singer’s touching expression of gratitude: “you are my repeating angel/not once but twice/ you are my – you save me half the time!”

For all of us who were underwhelmed by the latest Arcade Fire – this is where high-emotion indie rock is, definitively, at.

Listen to “repeating angel” here on Youtube. Crush comes out in a little less than two weeks. Abe Vigoda just rolled through the Great American Music Hall (anybody go?) but, rest assured, they’ll be back.