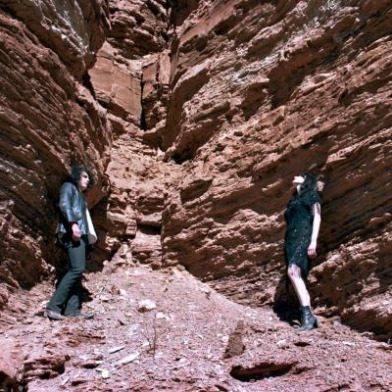 Tamaryn hails from here. Perhaps you’ve unknowingly glided past the duo in that killer vintage store you like, unsuspecting of the amount of noise these people are capable of producing. San Franciscans, bringing the shoegaze.

Tamaryn’s noise earned them their fair share of hype this summer, leading up to last week’s release of their debut, The Waves, easily ranking them as one of SF’s indie bigshots. Before I ultimately agree that this band is pretty awesome and link to some of their stuff, a few words on shoegaze, that odd genre Tamaryn has so faithfully rekindled.

Nowadays in the indie music world, genre – often declared by a band about itself – exists in such a fluid state of disintegration and recombination that it borders on joke status (experimental/witch house/surf anyone?) That’s why the fact that Tamaryn’s sound can be honestly summed up succinctly as shoegaze (their myspace pronounces them “visual/minimalist/Americana,” all of which I am choosing to dismiss) is so darn unusual.

Shoegaze is historically situated in the late 80s/early 90s British/American alternative scene. It was made by the gloomy folks in The Jesus and Mary Chain, Galaxy 500 and, most famously, My Bloody Valentine, among others. It is sluggish rock, bathed so heavily in distortion that the guitar’s acoustic voice is completely scattered, with multiply layered, often ethereal, often female vocals. It sounds like it would go great with drugs.

And all of this describes Tamaryn to a T. My only worry is that shoegaze has been tapped, so to speak. That is, I would venture to suggest that the style doesn’t leave a whole lot of room to maneuver, and that My Bloody Valentine may have stretched the sound to its outer limits with their epic Loveless.

That being said, here’s to an incredibly solid debut and Tamaryn’s evolution to come! For now, all you really need to know is that “The Waves” has a sick grumbling bass line and “Choirs of Winter” is timeless songwriting, flatteringly dressed in shoegaze garb.

Listen to “The Waves” and “Choirs of Winter” here on hypemachine.

No SF tour dates in the near future, but, well, they live here. They’ll be back.