An Unusual Birthday Party for an Unusual Creature: Claude the Albino Alligator Celebrates His 15th Birthday At the Academy of Sciences Tomorrow, and You’re Invited! 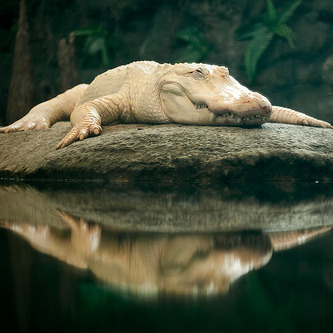 If you have frequented the California Academy of Sciences anytime in the last few months, you may have perused through their recently extinct “Extreme Mammals” exhibit, which showcased strange and rare live animals and fossils to the oohs and aahs of children and adults alike.

But unbeknownst to some, the Academy has another particularly unusual creature from the animal kingdom on permanent display, and tomorrow is his birthday.

Claude the albino alligator, who has been a resident of the Academy of Sciences since 2008, will be turning 15 on Wednesday, and to celebrate the Academy will be opening its doors for free for the public to join in his birthday celebration.

As a member of such a rare species, Claude gets the celebrity treatment (not unlike that of the “Alligator King” in this old school Sesame Street skit). According to the Chronicle, he is privy to three private training sessions a week, followed by 15 fish pellets. He also has his own habitat after a former female cohabitant named Bonnie clamped down on his foot early last year and was eventually moved to St. Augustine Alligator Farm.

“Claude has been more active since Bonnie left,” biologist and handler Brian Freiermuth told the Chronicle. “He is better by himself, as he was stressed out with her there. He has interactions with his turtles. He is eating well. He knows his name and responds to whistle commands.”

At the mere adolescent age of 15, Claude measures out to be 8 feet 5 inches long and weighs 181 pounds. Although he could live up to the age of 80, don’t expect him to wind up back in the wild anytime soon–albino alligators don’t survive on their own because their white skin causes them to stand out for their predators.

“Beyond his albinism, which adds interest, Claude is pretty cool,” Freiermuth said. “He’s a quick study.”

So get ready to put on your party hats and bring down the fish-shaped gator chow cupcakes to honor San Francisco’s own alligator king. But you should probably leave your alligator skin ensemble at home–it’d probably make Claude a little snappy.