Is This Paradise? No, It’s San Francisco During Burning Man 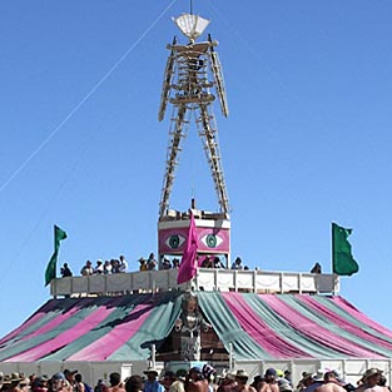 Pop quiz, hotshot: what’s the best time of year to be in San Francisco?

Bay to Breakers? Halloween? The two days every summer when it’s actually warm?

All good guesses, but the best time to be a San Franciscan is the magical week in late summer when a large portion of the city’s population piles into their hybrids and treks out to a desolate stretch of the Nevada desert to take psychedelic drugs and network with the guy in the glowing lobster suit to get an interview as a firmware engineer at Google.

While Burning Man is a magical time to be on the Playa, it’s an even more magical time to be in San Francisco. From now until the man goes up in flames on September 6th, a whole litany of places, usually so crowded that no one ever goes there, will be virtual ghost towns.

This is where you, the poor, unfortunate soul who couldn’t convince your boss that building a three-story wrought iron sculpture of a cow that shoots flames from its teats is a legitimate business trip, stand to reap the benefits. Burning Man is the one week a year when you can do all of the hipster stuff you always wanted to do, but never did, because all of those places were too full of hipsters. Until next Monday, San Francisco is more of your oyster than ever before because the protective shell is running around the desert, naked, tripping on ecstasy.

Here are some suggestions:

Go to Bourbon and Branch. The Tenderloin’s premiere faux-speakeasy, has a cool, noir atmosphere and a top-shelf drink menu. There are few joys in life greater than paying $12 for a cocktail and, after taking a sip, realizing that it may have actually been worth it–an experience that Bourbon and Branch delivers with some regularity. The bar’s only problem is that it’s perennially so packed full of dudes with scruffy facial hair and porkpie hats that it can take over 15 minutes to even order a drink, on top of the ten it takes the bartender to actually make it. With all the Tom Waits impersonators gone, you can easily make a beeline for the bar.

Organize a kickball game on a sunny day in Dolores Park. Even though half of the fun of spending a sun-soaked afternoon in the park is watching the throngs of humanity who flock to the Mission hotspot every time the temperature breaks 72, it’s often impossible to get enough space to comfortably spread out into the sea of brightly colored plaid and islands of Pabst Blue Ribbon. With an empty park, you’ll have more than enough room to play kickball, frisbee golf or even cornhole to your heart’s content. Heck, you might get away with bringing a portable stereo and blasting Dave Matthews Band without someone threatening to beat you senseless with a fixed gear bike.

Feel free to hit on that cute, hip-looking member of the opposite (or same) sex you meet at a bar. If all goes according to plan, and the two of you end up having a slumber party, the odds you’ll wake up the next morning and be invited to his or her photography gallery opening is infinitely lower than it will be for every other week of the year.

Bootie, on the other hand, will still be awful.

Any other suggestions for cool things to do in the city during Burning Man?