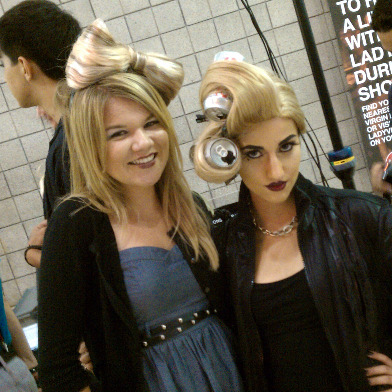 Tuesday, August 17: The everlasting Lady Gaga is headlining her second night in San Jose this evening, cheapest tickets are $175. It’s pricey, but the freak show of a musical performance is definitely worth seeing sometime. And yes, she can actually sing.

Wednesday, August 18: San Diego surf-punks Wavves are heading to Amoeba over on Haight to put on a free show for your viewing pleasure. The trio is also putting on a show at the Rickshaw Stop this same night, for $14 at the door. It starts at 8:00pm, be sure to check either of the shows out. They’re a lively band, and might even have a set list if they’re not too drunk.

Thursday, August 19: Reggae band Steel Pulse has a long, long history of protesting and playing shows. They’ve gone through over a dozen members, but their current jammers are coming to the Fillmore on Thursday to give us some positive rhythms. Tickets are $35, show begins at 9:00pm.

Friday, August 20: Ghostland Observatory isn’t much about ghosts or observing, but they are about having a good time. The dance-punks are coming around this way on Friday, playing the Warfield for only $22.50. Show starts at 9:00pm.

Saturday, August 21: I usually don’t throw any events that are too far from home on here, but sometimes a concert is just plain worth it to trek out of town. This Saturday there just happens to be two of those. In Monterey, we have Bob Dylan and His Band playing all Dylan’s classics (7:30pm, $45), and in Saratoga we have B.B. King and Buddy Guy (8:00pm, $59.50) taking us back with some old soul. Both are perfectly acceptable reasons to get a baby sitter.

Sunday, August 22: The biggest rap tour of the year is coming up. Rock the Bells is making one of its four stops at Shoreline Amphitheater, featuring Snoop Dogg, KRS-One, A Tribe Called Quest, Wu-Tang Clan and many more. All four acts listed are playing their debut albums, so naturally this is a once-in-a-lifetime event. Show starts at 10:30am, tickets are $55.50. Get the full line up here.

Sunday, August 22: Oakland’s annual Art and Soul festival brings us a couple big names this year, including MC Hammer and CAKE. It’s only $15 to get in ($10 in advance), and there’s tons of food, art and other things to enjoy. Check here for more info and tickets.

Bratty-surf-punks enjoy a couple things. The beach, weed, beach balls, beer. And so, that’s what Wavves writes about. The San Diegans bank on distortion and catchy melodies, and it works. Get their song ‘King of the Beach’ here.

Lord Kanye West has blessed us with another musical bit born of his divine excellence. That was sarcastic, but he really does have a new song. It’s called ‘See Me Now’. It features Beyonce, and he has a line that goes “I’m like Socrates, but my skin more chocolaty.” That’s pretty good, not going to lie; and the song is too. Download it here. He also has a collab coming out with Bon Iver, I’ll be sure to throw it up here when it’s released.

Vampire Weekend‘s new single ‘White Sky’ gets a little boost from electro duo Basement Jaxx, how could it not be a fun song? As BBC’s Radio 1 Dj Annie Mac puts it well in the beginning of the song, “They’ve done a lot of justice to the record, just kept it as is but made it more tropical and fun.” And here it is.

Heard it Through the Grapevine:

Check out Katie, Andrew, and Ramona’s coverage of Outside Lands if you didn’t get a chance to go. Or if you did, see what you missed while you were eating barbequed oysters. An overview of Saturday is right here, and Sunday’s right here. Also, Spin gives us their take on the top 8 moments of the weekend.

There’s a new documentary coming out on Bruce Springsteen, and Rolling Stone gives us all the details. The film will be shown on HBO in October (damn you premium cable subscribers), and it will also be released on disc around that same time. The documentary focuses on Springsteen’s creative process, taking us through the making of one of his albums. Sorry, this one’s not about the sex or drugs.

What do you call an indie band that’s #1 on the charts? Two answers. An oxymoron, or Arcade Fire. Either way the Canadian band stopped by The Daily Show last week to play a couple songs, you can see a video of their performance here. They also released the dates for their upcoming tour, they come to Berkeley’s Greek Theatre October 2nd. And find out how they became king of CD sales.

Neil Young has seen the needle and the damage done. But he’s also seen the oil and the damage done. The American singer and guitarist is staging a Gulf Coast benefit tour this fall that aims to raise money for people and towns along the gulf that have been affected by the oil spill. Unfortunately Neil doesn’t have any dates on that tour set around here, but he will be in Mountain View later this year for the Bridge School benefit. Find out more from Paste here.

Recession? Bird Man doesn’t think so. The rapper/”father” of Lil Wayne just bought a $2 million sports car. The Bugatti Veyron goes upwards up 200mph, and costs over $300,000 each year to keep it running.

If there’s one thing Coachella-lovers love almost as much as Coachella, it’s talking about Coachella. Stereogum is hosting a little guessing game on who’s 2011 headliners will be, so click here and submit your guesses. They’ll even cite you when the time comes around if you’re right.

This is definitely the trashiest piece of gossip around, but also the most “WTF?!” worthy. Internet sensation Tila Tequila performed at “The Gathering of the Juggalos”, a concert put on by the face-painted rap group Insane Clown Posse. As if that wasn’t horrible/weird/funny enough, the crowd reportedly berated her on stage with various objects. But then things got serious and they smashed all the windows to her SUV. A video can be found here.

Billboard and David Bowie are silencing rumors. NO. David Bowie is NOT going to do a collaboration with Lady Gaga.