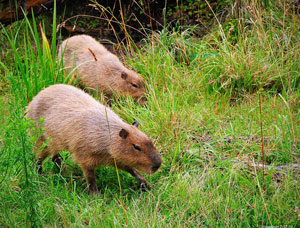 No, the zoo isn’t infested. As ABC reports, two female capybaras have arrived at the San Francisco Zoo.

Primarily found in South America, capybaras are the world’s largest rodents weighing in at up to 154 lbs. They are semi-aquatic, which makes the lush forests, rivers, and swamps of South America perfect habitats for the creatures.

According to the Ex, our new capybaras, named Rosemary and Beryl, weigh 100 pounds and are 2 years old.

Capybaras breed rapidly and are thus not considered endangered. They are also very social creatures and, according to CBS, may end up in an exhibit with anteaters if they get along. For now, however, you can find them in the made their home in the Puente al Sur section on the north side of the Zoo.