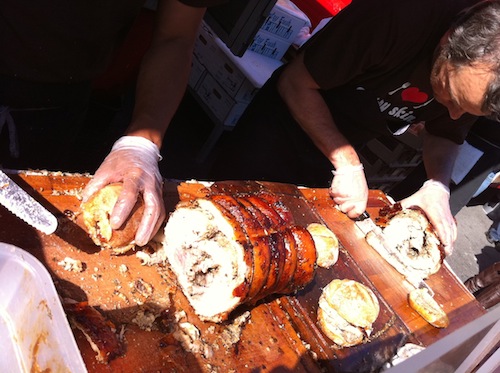 The San Francisco Street Food Festival was hosted last Saturday in the Mission District and had to reign as the best food festival ever. With over 40 local chefs and food vendors setting up shop, it brought the best of quick and easy to-go food of all kinds right to your fingertips.

By the time I arrived at the festival located on 24th and Folsom at 2pm, the place was already packed to the brim (there were already over 250 people checked in on Foursquare). Looking at all the individual food vendors, it seemed like they all had a common system that consisted of three dollar “little bites,” larger meals that priced up to eight dollars and a beverage that varied in price. Located in some spots was a fenced-in bar area that required a wristband to get in and drink tickets to purchase alcohol.

After hearing great things about the burger sliders from Kitchenette SF, it was decided that it would be the first thing I tried. The line was about 25 to 30 people long but surprisingly went by very fast. After ordering, I got my slider instantly and was delighted by its delicious taste. The mini-burger consisted of a mini-English muffin, blue cheese, pickled mustard seeds and caramelized onions and priced at three dollars, my only regret was that I didn’t order two.

Pumped up and ready for more, I wandered around to find the next dish to try and instantly stopped at Flour + Water’s pork shoulder sandwich. Again, the line was very long but fast-paced. The sandwich needed a little more seasoning but was still very delicious.

Taking a break, I wandered to the weird-yet-understandable Pepto Bismol stand to find out that they were hosting a competitive eating contest. Champion Joey Chestnut faced off against a collective group of five regular festival attendees to see who could eat the most tacos in five minutes. I didn’t stick around for the end but seeing how Chestnut devoured 10 tacos in the 45 seconds, I think we all know the outcome.

Despite eating two meat dishes, I still wanted to try a lot more food. Looking around the venue, the always popular Creme Brulee Cart was sold out three hours into the festival, the Curry Up Now Truck was insanely busy and everything looked delicious. Overwhelmed by all the choices, I decided to go back to what I know: meat.

My favorite dish of the day was hands down the Rotisserie Porchetta from Roli Roti. I was daunted from trying this dish because the line was considerably longer than most others but after seeing people eating the sandwiches, I knew I had to brave it out. Not only did the chefs serve amazing food but standing in line was also entertaining. Roli Roti owner Thomas Odermatt supplied the lines with samples of the pork he was cutting in front of us while joking around with the crowd. The sandwich itself was amazing with a subtle salty taste. While eating it, I could see people glancing at the sandwich and asking me where I got it.

After the Rotisserie Porchetta, I could barely walk let alone eat another meal. I spent nearly $40 on food but if I had a bottomless stomach, I would have eaten myself into bankruptcy. At the end of the day, I sure some will complain about the long lines and the necessity of drink tickets but its pretty safe to say that this years Street Food Festival was a complete success.