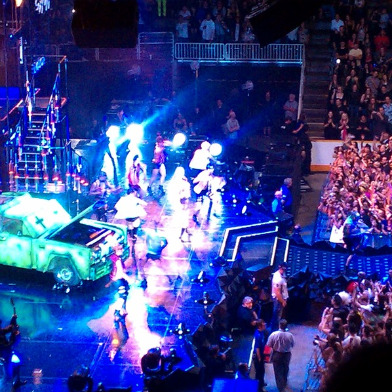 Lady Gaga has been such a pervasive pop culture presence of late that it’s hard to believe that a mere two years ago, not many people had even heard of her. Just over a year ago, she was playing clubs like Mezzanine here in San Francisco. Eight months later, she was headlining the Bill Graham Auditorium, and now, nine months after that, she’s invaded the HP Pavilion in San Jose. Is that the definition of a meteoric rise?

I didn’t get on the Lady Gaga bandwagon until mid-2009, which I regret, because man, I would have to loved to have seen her in a club setting. I had to make due with the Bill Graham Auditorium show, which was the beginning of her current Monster Ball tour. She was originally going to begin a tour with Kanye West in 2009, but after his VMA Awards speechus interruptus, that tour was canceled, and she decided to go it solo, and the Monster Ball was born. But after seeing her S.F. stop, I got the feeling that the show, impressive as it was, was kind of slapped together, and probably designed with a shorter set-list in mind.

Needless to say, the tour as I saw it Monday night is bigger. Much bigger. Bigger sets; bigger costumes (of course!); and a bigger crowd. Madonna set the bar way back when with her Blonde Ambition tour, and pop stars have been reaching for that ever since. Amongst all the smoke and mirrors, the Monster Ball has a story to tell, and as infuriatingly literal as that story sometimes is, I will always appreciate Gaga’s attempts to top herself.

Some of the only holdovers from the tour’s earlier leg were the video montages, projected onto a giant screen that encircled the stage at the show’s opening, and during longer costume and set changes. Gaga knows how to work the crowd into a frenzy, and the show slowly built its opening, as slo-mo black and white scenes of her twirling, and getting slapped, made way for the first number “Dance in the Dark,” with the first half of the song sung behind the curtain, revealing her posing silhouette. By the time the curtain lifted, the crowd was on its feet, screaming along to the song.

The show’s story, which one needn’t worry about following, as Gaga finds the need to explain it more than once, (something Madonna would only do off stage. Gaga take note!), involves her and her friends trying to make it to the Monster Ball, while being sidetracked by a broken down car, a subway train that leads them astray, and a tornado (yes, a tornado) that drops her and her gang in a scary version of Central Park, complete with black trees, and park benches made of giant razor blades.

It was at that point in the show, with the song “Paparazzi” that I stopped being annoyed with its literalness, and just embraced the whole ridiculous mess. (I wouldn’t want to spoil anything, but if you’re wondering if the “Monster” in “Monster Ball” makes a literal appearance, that would be yes.)

Of almost equal entertainment was counting the number of different things seen attached to the heads of the fans–sorry, “Little Monsters”–in the crowd. Among those items were caution tape; feathers; soda cans; orbiting rings; fiber optic cowboy hats; mirror shards; bows made of hair; and horns. Also, there was a guy in a bunny costume. I don’t know.

Of course, all that paled in comparison to the get-ups Gaga donned during the course of her show. My favorite was probably the white wedding dress/angel costume, with its huge train, wings, and fan headdress that opened and closed during the course of the song “So Happy I Could Die,” sung while standing on a platform hovering above the crowd.

The show clocked in at two hours, and I can see an argument for some tightening here and there. Gaga likes to talk to her fans. A lot. And while these speeches are endearing, they also have the tendency to grind the show to a halt.

The irony inherent in her commanding people to be “who you want to be,” paired with her pleads for worship (she likens herself to Tinkerbell, a modern pop princess fairy who will die without our constant applause), have been noted before, most brilliantly by Rich Juzwiak, and a lot of her audience love could be perceived as pandering. But I’m pushing middle-age here, so Gaga’s message of embracing ones inner freak and mutual acceptance is not really aimed at me.

I hope it does get though to those who might benefit, and the fact that a nightly donation of $20,000 goes to a LBGT charity benefiting homeless youth means she’s not just talk.

She’s also not just show. My defense of Lady Gaga, to those who just don’t get it, always begins and ends with the fact that the lady has talent. She’s got an amazing voice, and a complete knack for writing a catchy pop song. Lady Gaga without the talent is Ke$ha, so I’ll take Gaga any day.

Photo from Monday night’s show from Violet Blue, see a gallery of her pictures from the concert here.