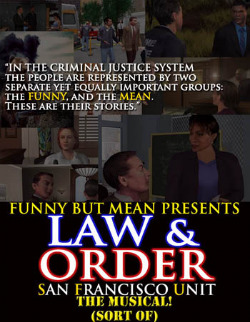 The television genres of criminal drama and musicals don’t usually intersect, unless you are attending the latest production by SF’s comedy troupe Funny But Mean.

The show, which runs September 13th, 20th, and 27th will incorporate characters “ripped from the television series” including Special Victim’s Unit and Criminal Intent, as well as local notables including Appeal pal Phil Bronstein (or a facsimile thereof). “Yes, we are doing Komodo dragon jokes,” Funny But Mean producer (and Appeal contrib) Richard Ciccarone tells us.

After the cast solves “what may be one of the deadliest and weirdest crime waves in San Francisco history,” Ciccarone tells us “the audience will ultimately decide the fate of the accused.” Interactive!