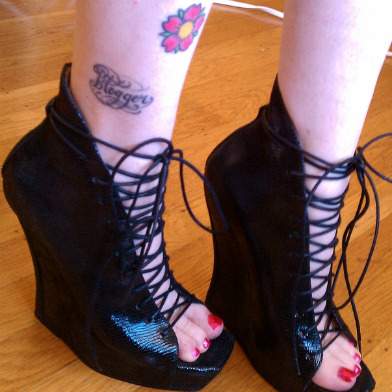 And, indeed, the tattoo is like the SAT score of SF, no matter how shitty the number, you can’t get into college (a legitimate one not somewhere like Reed where your grades are determined by your nail polish color) until you get one.

There are basically 27 types of tattooed San Franciscans, but in the interest of sanity we’ll only discuss 26 (three): Serious Sleeves, Tourists, and Ruminators.

While some tourists vacation in Greece and never leave, most return home, and never talk about what happened in Sardinia. The same is true of tattoo tourists. Often someone will get their one Vonnegut tattoo (so it goes, indeed), skeleton key, or foot star, put some pictures up on Facebook, and never feel the need to go back to Greece. (These are often the same people who try cocaine once and then completely forget about it.)

While a Serious Sleeve often starts out as a Tourist by getting a star tattooed on their foot, they don’t stay there for long, possibly because while a Tourist’s solution would be to cover up that mistake with a shoe the Serious Sleeve’s instinct is to turn that foot star into a leg galaxy.

Last, but certainly not least, there are the ruminators. These are the people who want a tattoo, but can’t figure out what to get or where to get it. They spend hours on Contrariwise mulling over fonts and are prone to sketching things on the inside of their wrists.

They take tattoos way too seriously, often wanting something supremely meaningful that they also wouldn’t feel like a tool explaining to someone,

“It’s about personal freedom and my grandmother.”

For a myriad of reasons, including death from old age, these people will probably never actually get their tattoo, which in the long run may be for the best.

After all, what San Franciscan wants to be part of a club that would have them as a member?