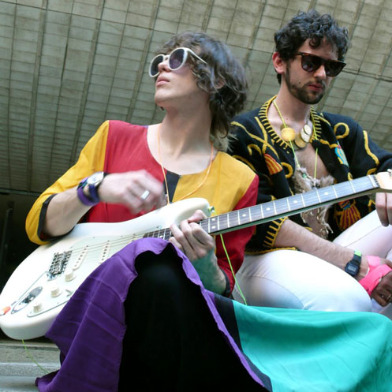 Wednesday, July 21: Brooklyn psychedelic synth-rockers MGMT are headed to the Fox Theater in Oakland tomorrow. Show starts at 8:00pm with Francis & the Lights. The venue says that this show is now sold out, but if you really want to go there’s always scalpers and Craigslist.

Friday, July 23: The Bay Bridged is holding their second annual fundraiser dubbed, Regional Bias. This celebration of local music/art show starts at 8pm at the Verdi Club in Potrero Hill, show up an hour early to sample local eateries. Tickets can be had for a $20/$25 donation, or $50 for free beer, food, and other goodies. Get them here.

Sunday, July 25: It’s Stern Grove season, which means they’re bringing us free music from around the world for great times with the family. This week they bring us Jovanotti, an Italian popstar who rhymes and sings over a unique blend of hip-hop and jazzy-rock. This event, and all others over at 19th and Sloat are completely free. Every Sunday until August 22nd, check it out.

This Sunday is going to be especially busy. SF Weekly’s All Shook Down is having their North Beach Music Festival, headlined by Neon Indian plus a healthy serving of local talent. Tickets $14-$40 for v.i.p., here.

In the near future: There’s a few events that truly capture the beauty of Golden Gate Park, one of these being the Hardly Strictly Bluegrass Festival. SF Weekly gives us the scoop on this years 10th anniversary lineup, here .

Speaking of The Dead Weather live, here’s a Spin exclusive of the band kicking off their tour in D.C.

Local emcee Spank Pops hails from the Western Addition, where he still resides according to his Myspace. He’s got a style as unique as his name, and his new Beautiful Noise EP can be downloaded for free, here . You might even recognize him (he worked at Haight boutique TRUE for a while.)

M.I.A.‘s real name is Maya. That’s also the name of her new album, but it’s spelled all futuristic and crazy-like, kinda like the way the music sounds. Listen to // / Y/ for free on her Myspace . And if you like it, buy it here.

Spin and iTunes bring us 15 free recommended tracks from the magazines August issue. Check out the playlist and get the download code here.

Heard it through the grapevine:

You know what’d be crazy? If Drake had a jumbo jet named after him. Oh wait, he does. Virgin America sure knows how to throw a party. And according to Billboard, even Arnie Schwarzenegger was there.

Paul McCartney stopped by AT&T Park the other weekend, playing an awesome set which included a span of solo songs and also paying tribute to Hendrix, Lennon, and Harrison, and only two people called to complain about the noise. Almost 45 years ago, the Beatles played their last public show at the local Candlestick Park. Check out the original Spin article here.

New Orleans rapper Lil Wayne is currently in jail. He’s also about to release an album. How does that work? Rolling Stone tells you how, click here. Also check out his NSFW new music video, where he ashes his blunt in a Grammy statue.

What do Trent Reznor and Facebook have in common? An upcoming movie soundtrack. Find out more from Pitchfork here.

Josh Homme of Queens of the Stoneage talks about his new label and the next QOTSA album in Rolling Stone.

Billboard magazine and the Air Force sponsor the ‘Fantasy Festival’, you pretty much get to vote on the music festival of your dreams (I know you’ve daydreamed about this). Submit your choices here.