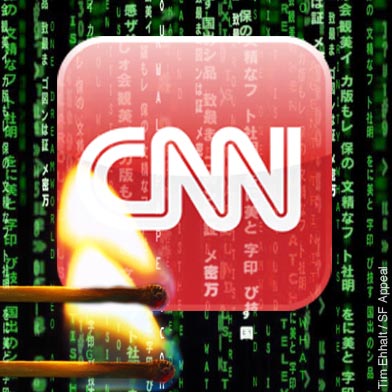 In the first part of his response (we have divided it in two because we know long articles can be confusing! Then again, some people insist on being confused), The Internet Etiquitteist made it clear to The Internet Etiquitteist that “The only people who claim to know anything about social media are self-important douchebags who have no idea what they’re talking about,” before telling him that “If you start whining that CNN stole your idea, your flame war will fizzle before it even starts.”

And now, how to wage that flame war:

You have two options: you can flame them on the merits of what they’ve written or you can levy a barrage of ad hominem attacks and hope something sticks. There are pros and cons to both approaches.

For the first approach, let’s look at their column “When and how to ‘friend’ your new bud online”. We can start at the top and work our way down. You could criticize the inconsistent tone of the piece–how the title of the section, “Netiquette,” recalls the instantly dated, tin-eared buzzwords of the AOL-era (e.g. “Infobahn”) and reeks of a sincerity that conflicts with the winking, isn’t-this-all-kind-of-ridiculous tone of the piece itself.

You could mock the piece for starting with a joke about the acronym “IRL” and then immediately explaining the joke in a way that’s supposed to establish authorial authority but really just separates readers into two groups (the people who already knows what “IRL” means vs. the people who don’t) in a way that insults the former and condescends to the latter.

Besides, the column is actually pretty good. They’re clearly writing for an older, less tech savvy audience–the type who mistake CNN’s dumbed down, “but-on-the-other-hand” attempts at “balance” for actual journalism. This is a network who’s flagship interview show is replacing the venerable/senile/looks-like-an-owl Larry King with the host of America’s Got Talent.

The authors know who they’re writing for and provide useful solutions to problems that their readership probably has on a regular basis in an engaging and humorous way. (As opposed to this incredibly useful bit of sage wisdom). If you nit-pick them point for point, it might make you feel better but only a small handful of readers will make it to the end of your column–which is a shame because that’s where you’ve hidden all the good jokes.

My point is that ad hominem attacks are where it’s at. For example, did you know that if the sexual assault charges on Al Gore are proven true, then it also proven that global warming is a hoax? Similarly, if you can prove that something the authors of this column have done in the past is objectionable, you can prove that all of the advice they give in the column is similarly objectionable WITHOUT EVEN HAVING TO READ IT.

Remember, it’s not a logical fallacy if you TYPE IT IN ALL CAPS.

If you really want to start a flame war, hit them where it hurts, hope they take it so personally they show genuine emotion, and then get your minions to savagely mock that genuine emotion.

Go to their other website, Stuff Hipsters Hate, and load up on ammo. Ignore the fact that you think their site is clever and actually Laughed Out Loud when they linked to one of their CNN articles about what to do if you’re being stalked online with a reference to a Badly Drawn Boy song (heart you Badly Drawn Boy). It’s imperative that you come out swinging with the a priori argument that they suck, have always sucked and always will suck.

I’ll get you started: the title–it’s the insertion of a meaningless buzzword into the idea that another, admittedly really clever, blog came up with, and quickly milked to death, several years ago. Didn’t the large swaths of “white people” that What White People Like simultaneously made fun of and sucked up to include everyone who would be considered a hipster, even though they would never self-identify as such? Isn’t it funny than the main thing hipsters hate is hipsters? It’s almost like people don’t like to identify themselves with a pejorative term. Zing!

If you’re really a dick, and being a dick is the x-factor in sustaining a flame war, you should be able to viciously pick apart anything that anyone writes. If you’re not quite at that level yet, that’s okay. Practice by criticizing everything you see all the time. When you get to the point where you’re legitimately unable to enjoy anything, you’ll know you’re ready to flame away.

It doesn’t matter if what you write is clever, relevant or even based in reality. What you’re really hunting for is page views, so the important thing is to get the other party to notice you talking trash about them. Hopefully, they’ll respond by talking trash about you. Your readers see their site, their readers see your site. Think of it as a link exchange, but with more swears. As long as neither party embarrasses themselves (too much), everyone wins.