Internet Etiquetteist: It’s Not My Fault If Certain People From My High School Have A Difficult Time Detecting Sarcasm In A Facebook Status Update 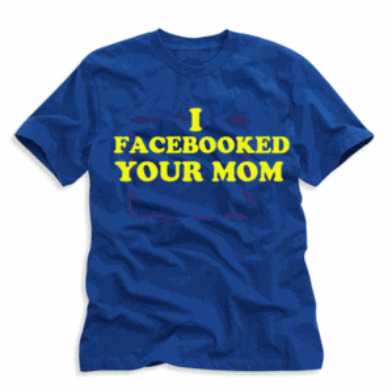 The interwebs can be an awkward place. It used to be the on the internet, no one knew you’re a dog, but now someone can, within minutes, not only find out what breed of dog you are but what brand of collar you wear and also your credit score. Some would say that this is a liberating freedom from the social norms that have inhibited human expression for centuries. Those people are rude. The rest of us live in a constant state of trepidation about how to transfer their real-word manners into the realm of Facebook, eHarmony and Youtube videos of chimpanzees riding Segways. The Internet Etiquetteist can help with your questions, drop him a line.?

I have spent a great deal of time sorting every one of my Facebook friends into a carefully segmented group in an effort to prevent people I don’t care about from knowing there is anything wonderful happening in my life and clogging up my news feed with meaningless comments like “Awesome” or “Christianity!” Sometimes this accidentally means that people I actually care about, like my only two remaining friends from high school and mother, are sorted out of current updates in my life. I assume they see them and therefore neglect to talk to them about it when we meet face to face.

Is it better to err on the side of privacy or risk the guy I dated for a week in 8th grade “Like” that I changed my relationship status to single?

Your borderline-obsessive commitment to the organization of your online life is commendable. As Mark Zuckerberg continues his endless quest to accentuate the douchebaggy, narcissistic aspects of Facebook until it’s as insufferable as Twitter, fine-tuning Facebook’s privacy settings to the point where you can post whatever you want with no fear of the repercussions is becoming more and more difficult.

Do you really want your mom seeing everything you do? Were you never 15? If you 15 at one point, did it teach you nothing?This move is intentional on Facebook’s part and their goals in doing so is twofold: 1. The more personal information you share with a larger part of the network the more opportunities Facebook has to link the advertising seamlessly integrated into your profile to the adverting seamlessly tied into the profile of the person you’ve never met who randomly friended you and you only accepted because they looked cute in their profile picture and 2. Maybe, just maybe a celebrity (a real live celebrity) will accidentally allow one of us mere mortals to see their personal page.

If you were to get the opportunity to see the political views of the guy from Man v. Food, you would be so grateful that you would totally click on one of the actual paid advertisements running down the right side of every Facebook page. Well, you probably won’t go that far, but you’d think about it. Maybe. Either way, Zuckerburg gets paid* and that wardrobe full of identical grey hoodies doesn’t pay for itself.

I can’t recommend sorting your friends into groups like this highly enough. Unless you’re lazy, because in the time it takes to go though every one of your friends and decide exactly how much of your online life they should see, you could watch the YouTube video at the bottom of this article approximately 100 times.

Making it so people can’t see your status updates is key because then you don’t have to do your second cousin (twice removed) the indignity of rejecting their friend request or run the risk of having them leave an angry treatise on your wall about why they find that picture of you wearing a t-shirt saying “What Would Jesus Brew?” personally offensive.

And then you don’t have to respond, “I don’t understand why you’re so mad, you believe that Jesus’ blood transubstantiates into wine, so the guy must have been wasted all the time. Also, his body turns into crackers so The Adventures of Black Jesus is probably just wishful thinking. You’re a Republican, you have to be in favor of that.” And then, before you know it, you’re 15 minutes into a phone call from Grandma explaining how sorry you are and, no, its not always the best idea to be such a “funny guy” all the time, okay, thanks Grandma I’ll see you August. Love you, bye.

I’d say let your friends see all the stupid, embarrassing crap you post. If you only keep in touch with two people from high school, it stands to reason that majority of your graduating class either sucks or has two children each and only uses Facebook to post pictures of their offspring as if to say, “I made this, congratulate me.”

While you’ve taken proactive steps to keep this insufferable drivel out of your daily social networking, they, like most people who don’t suffer from crippling OCD, didn’t even know this type of Facebook customization was even a option. As a result, when they see all the potentially embarrassing stuff you were afraid of them seeing in the first place, it’ll be drowned out in a sea of “Awesome” and “Christianity,” no significant judging is likely to occur.

Your mom, on the other other hand is a completely different story–block her. Do you really want your mom seeing everything you do? Were you never 15? If you 15 at one point, did it teach you nothing? If she’s not blocked from seeing your updates at this very moment, you need to do it right now before you forget.

When you see her in person, just imagine it’s still the heady times of 2006, before the olds took over Facebook with their constant Farmville updates in a nostalgic effort to reconnect with the sepia-tinged, agrarian setting of their childhoods.

In 2006, you could post something knowing full well that there’s no way your mom could ever see it. Back then, all she knew about Facebook was it was full of serial killers and the only reason she knew that is that she saw it on Dateline. Pretend the only way you can communicate with her is by calling her on the phone. Trust me, the only thing she’ll appreciate more than then familial contact is not knowing that you spent last weekend at a furry convention.

*Technically, Zuckerburg only gets paid if the ad is pay-per-impression and not pay-per-click but if all the perspective advertiser is looking for is brand awareness then pay-per-impression is going to be a infinitely more cost effective way to go. Not to mention that the Facebook has historically suffered from anemic click-though rates on its advertising, which is the primary reason that many analysis initially viewed the company as over-valued.

Now I feel bad for making you come all the way down here just to read something boring about online advertising. Here, watch this video of a chimpanzee riding a Segway that I alluded to in the introduction.

And one more time.

There you go, all better.