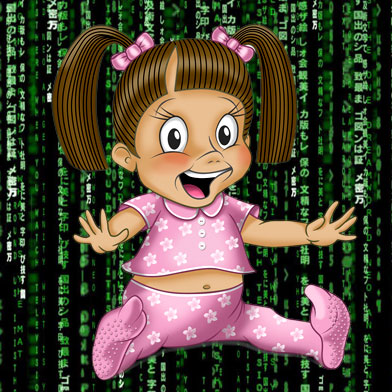 I am the proud parent of a beautiful six month old girl, who my husband and I recently took to our friends’ house for dinner. Our friends took some pictures of our family and then posted them on Facebook. Normally I wouldn’t have a problem with this but they included pictures of our daughter, even going as far as tagging her in them. We want to minimize our daughter’s online footprint while she’s at such a young age and would really like to have them taken down. There a way we can accomplish this without seeming like controlling, over-protective jerks?

As with all etiquette-related problems, there are two ways to handle this situation: the mature way and the juvenile, borderline-psychotic way. In all situations that don’t involve throwing feces at the judge presiding over your parole hearing, I heartily recommend the juvenile, borderline-psychotic every time. But what kind of un-credentialed expert in pretend internet something-or-other would I be if I didn’t present you with all the possible options?

Or was that question rhetorical?

Anyway, a classy person (Tim Gunn, Madonna, Dwayne “The Rock” Johnson, etc) would handle the situation by simply sending their friend an email asking that they not post photos of their child on Facebook and politely explaining their reasoning for doing so.

Unfortunately, you cannot do this because your reasoning is fucking ludicrous. Unless your child has a harelip or is actually a shaved Shitz Tzu wrapped in swaddling that you’re delusionally pretending is your human offspring, you have absolutely no reason to obsessively keep her pictures off Facebook.

Apologies if your child does actually have a harelip. If so, you might want to spend less time worrying about their “online footprint” and more time worrying about how to get that fixed. America still has a good three to four more years of being a first-world country and, aside from marketing vampire-themed soft-core pornography to sassy tweens, fixing harelips is what first-world countries do best.

I don’t want to come off as too judgy here. Your resiting of the temptation to set up a Facebook profile for your infant daughter is a admirable. Setting up a profile for a someone who can’t read, write or refrain from get poop all over themselves whenever they go to the bathroom is the equivalent of putting a vanity license plate with your name on it on your toddler’s big wheel. It serves no purpose other than to feed your own ego.

It’s pretending to attribute agency to someone that effectively has none and, hence, is really just an excuse to get a second profile entirely devoted to a certain aspect of yourself. You might as well make a profile for your pet iguana or a bag of sand. There is literally nothing sadder than people who list their infant’s favorite TV program as So You Think Can Dance. You know what your baby’s favorite TV program is? The one where are shapes that move around and then there are some noises.

All babies are dumb, especially yours. None of them can use Facebook and only a select handful can maintain a sizable following on Twitter. It’s a similar situation to the interns who manage Sarah Palin’s Facebook page, intentionally adding grammatical mistakes to each post to make it feel more “authentic.”

It may seem cute now but, in a few years, when she finally learns to read, everyone involved is going to be embarrassed that their oh-so-adorable shenanigans are saved on Mark Zuckerberg’s laptop until the end of time. Or until Barack Obama shuts down the internet to pave the way for our glorious Communist future.

Let’s say you’re the type of person for whom directly telling people you ostensibly respect your feelings is absolutely terrifying. Don’t be ashamed, passive-aggressive people make the world go ’round. Lucky for you there’s another way to solve this seemingly intractable problem.

Just like in writing fiction, the maxim “show don’t tell” almost always holds in issues pertaining to internet etiquette. While you could just tell your friends why you don’t like them posting pictures of your kid on Facebook without your permission, it’s equally effective to give them the first-hand experience of how that experience feels.

At first glance, this seems impossible because, more than likely, your friends either don’t have children of their own or, if they do, they probably don’t stay up all night worrying about all the impossible ways strangers could never actually harm their child. Or maybe they do and that’s why you’re friends–bonding over 1AM phone calls where you fret about how the newest media-hyped pandemic (Avian Flu! Rubella! A Third One!) will ravage your family.

For argument’s sake, let’s say that you don’t think there’s any way they wouldn’t take offense and the only way to get them to take the pictures down is cajole them, in the most juvenile way possible, into a personal epiphany where they re-evaluate the fundamental ideas behind their whole Facebook-picture posting value-system.

Post all the pictures you have of your friends (let’s call them George and Martha Washington) on Facebook and tag them in those pictures. That’s how you get their attention. Then, tag Martha’s pants as if they were a person. Not just anywhere on her pants will do; for this to work you’re going to have to tag the part where the baby comes out.

Label Martha’s naughty bits something like Lil’ Stevie Washington and comment on the picture “isn’t the cutest baby you’ve ever seen” or “aww…Lil’ Stevie has George’s eyes.” If you find mousing over your friend’s vajayjay is too emotionally or physically taxing, you can just tag any inanimate object next to them in a picture–a bag of sand, a pack of cigarettes, a rock that kind of looks like a race car–pretty much anything will work.

Do this for every picture you have of them. There is no way tagging someone’s un-conceived child will not them make them painfully uncomfortable. The equivalency here is perfect because an infant and a rock that kind of looks like a race car have about the same ability to navigate Facebook.

Hopefully, at this point they’ll make the connection themselves, remove the offending pictures and send you a nice handwritten note about how you’ve opened their eyes. Maybe the note will come with a box of fresh-baked chocolate chip cookies, stranger things have happened.

If they don’t understand, they’ll probably think its a joke–this is when you escalate. Post the rock’s social security number. Fret about how Martha’s pants-zone is deathly allergic to peanuts. Make a profile for your long lost uncle and have him write a really long, vaguely racist, comment about how the the bag of sand “looks a lot like this nice meskin’ boy who used to mow my lawn back in the 80s.”

Get your other friends with kids in on it and have them set up play-dates for their kids with George and Martha’s imaginary child. Anything to get them good and creeped out. Then, as subtly and politely as possible, go up to your friends and say, “isn’t it such a hassle when people post pictures of your baby on Facebook without asking you first?”

The pictures will be down by the next morning, guaranteed.