“The Most Awesome Job In The World”: SF Zoo’s Penguin Keeper 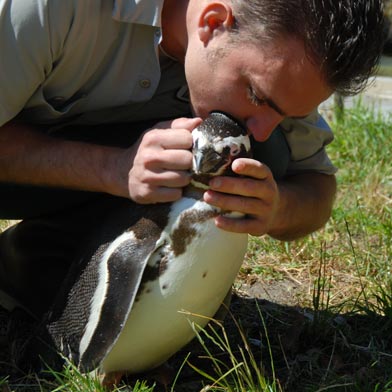 SF native Anthony Brown started his career at the San Francisco Zoo as a 12 year old volunteer, and continues today to take care of the Zoo’s penguins, pelicans, bald eagles, and cassowaries. (What exactly is a cassowary? Imagine a 150 pound, 5′ 5 omnivore, with “furry” feathers, and a 3 inch dagger-like claw (no, it’s not your ex-girlfriend). In fact, we learned that the cassowary is one of the largest avian species in the world and is a cousin of the better known ostrich.)

A large part of Anthony’s day is spent talking to the public and educating them on the incredible creatures in his care. With several public feedings a day, Anthony also balances his time between the different exhibits while record keeping, performing general animal husbandry, preparing meals, taking care of the exhibit landscapes, and updating the Zoo’s twitter , youtube , and Facebook accounts.

Thanks in part to Anthony, The SF Zoo was actually the first zoo to utilize social media for education and outreach efforts. Currently, our zookeeper is documenting the entire molting process (that’s when the penguins get a new set of shiny feathers), of Sparkles on Flickr so penguin fans can witness the transformation from start to finish.

We asked Anthony to fill us in on the latest gossip regarding the famous SF Zoo penguin soap opera. While Anthony says that Harry remains with Linda and that his rejected ex-boyfriend, Pepper, is still flying solo, with molting season coming-up, the zookeeper speculates that relationships can shift and new liaisons often occur. Not to burst your romantic bubble, Anthony tells us that penguins don’t usually mate for life, but instead stay together for a season or two before choosing a new conquest.

Despite the romantic drama, all of Anthony’s hard work has paid off for his healthy penguin population. It’s the largest Magellanic penguin colony in captivity, he says, and is used for populating other zoo’s penguin exhibits.

Earlier Tuesday, the AP reported that penguins dead from starvation were washing up along Brazil’s beaches, and Anthony confirmed that, as with many animals, the major threat to Magellanic penguins in the wild is decreased food supplies due to climate change and over fishing. Anthony says that penguins’ need for food has changed their migratory patterns and hopes that the zoo’s feeding data will assist conservation efforts. “Unlike the Lion King, penguins in the wild are very very hungry and thin,” he says.

Another goal of Anthony’s is to instill a sense of wildlife appreciation in young people. “Everyday young minds come here looking at the zoo’s exhibits and connecting with animals. And everyday, a child could walk away as a future environmentalist.”

Just yesterday, Anthony hosted a pelican public feeding and showed a group of visitors the damaging effects of abandoned fishing lines on the wings of seabirds. It is that type of direct outreach that inspires Anthony to proudly admit “I have the most awesome job in the world.”