Tree Hugging Group OK With Killing Them For Endorsement Fliers 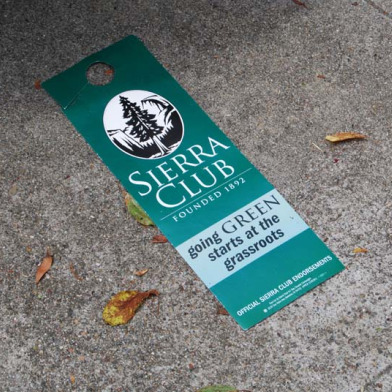 In San Francisco, the endorsement-flier business can be an ugly one, with voters’ doors festooned with political paraphernalia bearing the logos of all sorts of organizations, sometimes without those orgs’ knowledge. So, when a nationally-known environmental group’s name appeared on fliers left all over San Francisco’s doors and streets this weekend, you might assume that these tree-huggers would be aghast — but you’d be wrong.

Thanks for the Litter, Sierra Club reads the headline at Noe Valley SF’s blog post on Sierra Club-branded fliers cluttering their sidewalks.

And the blog’s commenters are none too pleased, either, with one saying that he recycled three on his run this morning, and another calling for the Club to be fined.

Handbill-plagued Noe Valley‘s not the only place this went down: Appeal readers were similarly incensed, with one sending us a blurry picture of the green fliers lying in the gutter, and another emailing asking “is this what my donation’s going to?”

Yes, the irony of fliers encouraging green living littering the streets (or even being printed on dead trees to begin with) doesn’t escape anyone here, but, knowing that candidates produce mailers bearing the logos of organizations without the consent of said organizations, before we started getting all Rain/Wedding Day, we called the national office of the Sierra Club (which is located here), who referred us to the local chapter of the Sierra Club, who referred us to the head of their political committee, John Rizzo. Rizzo, for his part, who owned up to the fliering, and expressed regret at the littering.

“There are people besides our people who and handing these out, and we’ve heard that some of them are getting sloppy about making sure they’re secure and don’t blow away” said Rizzo.

When asked about the whole “killing trees to make fliers to encourage people to be green” paradox, Rizzo seemed unfazed. “What’s the alternative” to paper, he asked. “Other groups are (fliering), so if we’re not going to do it because it’s paper other groups will be getting out their message but we won’t. This is still a good way to do that.”

“We don’t have the money to run TV ads” he said, noting also that money for the fliers comes not from donations you or I might make to the Club, but from candidates and Propositions “after we make the endorsements — no one is selling endorsements here.”

A contact with the national branch of the Sierra Club says that their policy is to use “better materials” for their outreach, but that fliers, themselves, are not frowned upon by the group. And the ones used locally are, Rizzo reminds us, recyclable.

Update 1:30 PM: Greg Dewar disputes the lack of funds argument both in a blog post from last month and in an email to the Appeal, noting that he finds it “amazing to see so many groups and campaigns (especially for DCCC) that have little money to begin with, who are spending big money on dead tree mail and doorhangers” when SF “has the highest concentration of voters online anywhere in the United States, and by using targeted online advertising, they could reach more people for less money.”