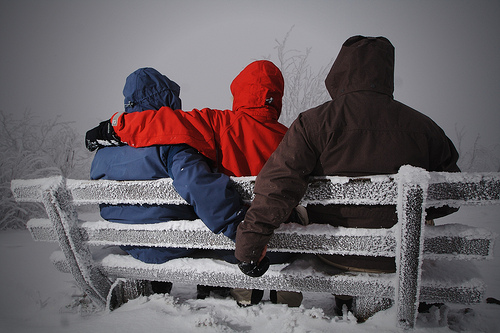 Sometimes, it takes someone else to reignite your sex life. Not that threesomes are or even should be the antidote to struggling relationships, but adding the right extra set of hands can make your sex life that much hotter.

When we think of threesomes, it’s this fantasy of everyone in bed altogether at once with someone sticking something in someone else’s hole. Like a Chinese fingertrap of sex.

In reality, this is often not the case. Threesomes in porn have the advantage of a director, someone to block out the scene and say, “OK, Rock Hardson, you’re going to lie down and stick it in her ass. Make sure to spread those cheeks for me! And you, Steel Roddington, you’re going to squat a bit and slip it right in her pussy. But angle a bit this way–I wanna see the all the pumping. Got it? Aaaand action!” In reality, it’s like herding cats. Cats who secretly hate each other and think the other is trying to steal her man through sex/is acting waaay too possessive for anyone to have any real fun. His dick isn’t THAT great.

What you say!! Cuckolding and exhibitionism/voyeurism can also involve three people, and not everyone gets to poke at someone else’s hole.

Cuckolding is a little more D/s-heavy. You’re deliberately playing with feelings of jealousy and humiliation in most cases, traditionally with the husband or the boyfriend sitting this one out…but you can play with any gender set-up. While one partner watches, the other person fucks the the third person–or they fuck him, however you want to see it. Sometimes the spectator is at the foot of the bed, waiting to (be forced to) clean up the mess. Other times, they’re tied up to a chair. They can be utterly ignored or verbally insulted. The scene can end there, or the spectator’s partner can allow his or her cuckold to reclaim their position in a moment of competitor’s enthusiasm.