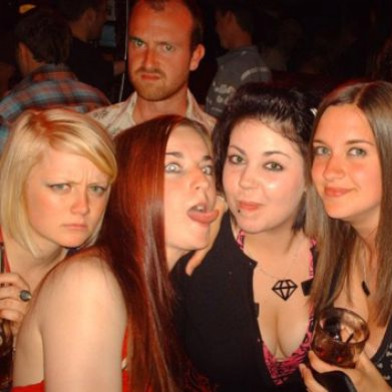 How do you know when you should allow friends on Facebook to see your pictures? Currently all of mine are private, not so much because I’m worried about potential employers seeing them but because I feel self-conscious about the paucity of pictures I’ve been tagged in. How do I allow people to see how fun and awesome my life is without them judging my lack of photos? ?

Worried About Impressing People From Her Hometown Who She Hasn’t Seen Since Middle School But Facebook Friended Her And Have Pictures Of Their Kids All Over The Place?

The simplest solution is to make more friends who like taking pictures. Go to a mixer for amateur photographers, awkwardly demand to exchange contact information with as many people there as possible and then start inviting them to things. At least a couple of them will take you up on your offer and, more than likely, they’ll be the type of people who make everyone stop whatever they’re doing every five minutes and and “say cheese!”

Even though these people’s constant need to remind themselves that they’re having fun reeks of desperation, you’re sure to end up in a bevy of pictures you can post on Facebook. When that bitch Jenny Weaver sees what fun you’re having, maybe she’ll regret not actually keeping in touch with you in a non-superficial way and change her profile picture from a shot of her snot-nosed infant riding a rocking horse to one of her drinking champagne out of a beer bong like a normal person.

While that solution is relatively simple, it does stand to backfire. There’s a good chance you’ll fall in with people who only take artistic photographs and then, before you know it, you’re 45 minutes deep into a terminally boring conversation about aperture, which is never going to impress Jenny Weaver no matter how hard you pretend to listen.

If you want to do this the right way, you’re going to have to invest some serious time and effort. The first step is to get rid of all your personal photo albums on Facebook and list your only interest as “valuing my privacy”. This way people will think that you’re not into posting pictures on Facebook, use the mystery to your advantage.

Then buy a plane ticket back to the decaying, Rust Belt city where all your middle school classmates still live. Once there, find the dive bar where people from your old rival high school hang out. Go to that bar and whenever you see people around your age taking a picture, photobomb it as hard as you can.

If you go someplace where people actually know you, you’ll come off as creepy and possibly insane. But if you go to a bar where you can go incognito, you can pull off the photobombs without anyone there suspecting a thing. When they post those pictures on Facebook, people from your middle school will see you being awesome because, after high school, all the hometown heroes became friends–at least on Facebook. After a solid 20-30 evenings spent photobombing, you can safely come home in the knowledge that the girl who sat behind you in algebra thinks that you totally have friends.

On the other hand, if the reason there are no fun pictures of you on Facebook is that you’re too agoraphobic to go out in public without having a panic attack or too fat to fit though the doorframe, you can always just Photoshop yourself into pictures from Last Night’s Party.