Internet Etiquetteist: How To Turn Your Anti-Semitism Into A Career In The Media 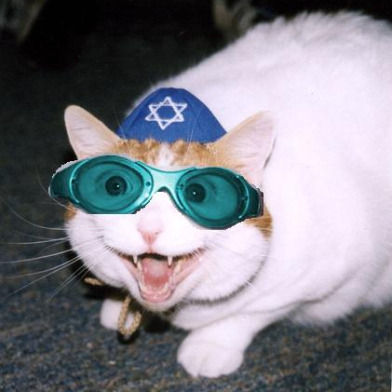 Last year, I met a guy on a dating website for Jews. We exchanged emails and I gave him my Gmail account that I rarely use so he couldn’t Gchat me. After our first date, he friended me on Facebook, found the Gmail account I use all the time and proceeded to send me a chat request. When telling this story some people act like I’m the crazy person. They are wrong, correct? Clearly he is the d-bag. Please tell me he’s creepy and that I can keep using this anecdote to explain why I don’t want to date Jews anymore. Also his name was Claude. Gross.?

1. That’s racist. 2. This is precisely why you shouldn’t post your actual email address on Facebook; him finding it is your own fault. 3. In this situation he’s the d-bag for not respecting your boundaries. He should have realized when he saw that the address you gave him wasn’t your primary, he was barking up the wrong tree. But, being a Claude, he probably just figured that, for some reason, you accidentally gave him the wrong email address and he was doing you a favor by connecting himself to the Gchat you use all day instead of being productive at work.

That said, this may be the perfect opportunity for you to live out everyone’s childhood dream: planting a fake trend story in the New York Times Magazine. The fake trend here is “Ethnic Frensing,” the systematic deletion of everyone from a particular ethnic group from your list of friends. Just like how you could use use your bad Claude experience as a reason to suddenly maintain an all-gentile list of Facebook friends, freedom-hating American teens across the country could be wiping their Jewish friends from their Facebooks because of similar negative experiences on J-Date, or because of that whole flotilla thing that happened or whatever. All that the article would need is a serious interview with a single teenager (hooray for one person trend pieces) and a few references to the Fox News coverage of the trend. Come on, did you think you could get a story into the lifestyle magazine of record without going though the minor leagues first?

Luckily, getting the story on the Fox News won’t be all the difficult; it’s already a combination of everything they love. It mixes the American right’s knee-jerk support of Israel and old people’s inherent fear of new technology. (Note: old people make up 100% of the Fox News audience).

First, sign up as an expert on social media on Help A Reporter Out, a website where lazy reporters can instantly query a network of “experts” to get an easy quote about whatever article they’re currently working on instead of actually doing the hard, boring slog of actual journalism. Whenever you see a query that’s even tangentially related to Ethnic Frensing (relevant topics: the internet, race, Keanu Reeves, etc.), respond by talking about Ethnic Frensing and hopefully, someone from Fox News will take you up on your offer.

Still, you can’t put all your eggs in the one basket. If you want this to work you’re going need a multi-pronged attack. Start spamming the Fox News message boards with comments talking about the kids these days with their Ethnic Frensing and their sexting and their pharma parties and their whathaveyous. Subtly slip it into the Fox News zeitgeist. Create a fake chain email, written in the 24 pt. blue Comic Sans font, about this disturbing trend and send it to the relative most likely to forward it everyone they know. Maybe put an animated gif of an angel in there for authenticity. If it gets circulated around enough, someone will send it to one of their grandkids who works in the media. If this happens enough times, one of these effete, latte-sipping, media-elite grandkids will read it and start to look around.

Here’s where you have to be prepared. Make a Facebook group speaking out against Ethnic Frensing. Send your cousin in high school a message asking her to sign up for it and soon, she, all of her friends, everyone they hooked up with at summer camp two years ago and everyone on those people’s soccer teams will be shouting at each other in all caps about how OBAMA IS A SOCIALISM and how MEGHN FOX WUZ HOTTR IN TRANSFORMERS 1!! so it will look like a real thing when a reporter finally reads it.

If you plant all these seeds all you have to do is sit back and wait for 1500 glorious words about a thing you made up to show up at your door bright and early one Sunday morning.

Just kidding! No one gets the newspaper delivered anymore, you’ll just read it online like a normal person. Once the article goes live, send the story of how you made the whole thing up to a bunch of blogs and wait for the Times to print a one-sentence retraction. Take that liberal media!