Hatless Chefs Not A Priority For SF Food Safety Officials 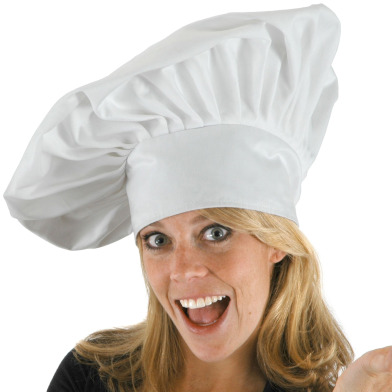 There was the blonde one I spotted in my high school cafeteria, the fine black one in a Baltimore bar and I’ll never forget the dense one at a barbecue in Jackson Hole, just lying there waiting for me to notice. These are just a few of the strands of hairs I’ve encountered in food over the years, tiny threads that have profoundly affected the way I approach each meal.

Maybe I examine restaurant dishes more closely than other customers or maybe someone has been playing a sick joke on me, but I’ve fallen victim to one too many unsanitary practices in my day–hair in my fare being a recurrent theme. For a while, I only ate out of vending machines, convinced a 6 pack of peanut butter crackers assembled by stainless steel machines in sterile factories would contain no surprises (Thank you, salmonella, for ruining that hope). I even started writing a business plan for “The Bald Chef,” a restaurant where only hairless people would be employed in my kitchen. (This might not fly under Equal Employment Opportunity Laws, but I’m sure bald people wouldn’t mind some preferential treatment for once.)

I eventually dropped the obsession and stopped inspecting food so carefully. San Francisco cuisine, which reigns supreme in my opinion, has me doing the opposite, namely, gobbling down with no concern of any foreign objects. This was until I read San Francisco Restaurant Critic Michael Bauer’s observation last week about the number of chefs letting their hair down. Literally. As fashion becomes more casual, restaurant chefs have moved away the from the stiff jackets and the tall French hats known as “toques,” in some cases abandoning hair restraints all together, even the informal baseball cap look that Wolfgang Puck made popular in the early 1980s.

Although San Francisco health regulations call for “all employees preparing, serving or handling food or utensils… [to] wear a hairnet, cap, or other suitable covering to confine hair,” Bauer says that most chefs simply forget. He does not shed any light on this state of affairs, but he and most people who commented on this article don’t seem to mind. The commentary on this article voiced more concern with the chef’s comfort and pointed to most hair in food coming from the customers themselves. (Even though I’ve changed hair color a couple times, I’m not taking the blame for the aforementioned list at the top.)

Like the comments on Bauer’s site, this issue is also not a the top of public health officials’ lists. “I don’t think we’ve noticed it too much, says Richard Lee, Director of Environmental Health Regulatory Programs at the Department of Public Health. “But this is a low risk violation and we concentrate on high risk violations, such as things that create food borne illnesses.”

Browsing through the 38 high to moderate violations that precede the low risk category–from rodents to cockroaches to flies–validates this nonchalant attitude. Also, it’s an issue of time. Unlike critics who apparently spend time studying the interiors of restaurant kitchens, health inspectors have a shorter timeline to accomplish more imperative tasks.

“When health inspectors come into restaurants, it’s a snapshot of what it is at the time. They don’t play big brother or stand over them,” Eileen Shields, Public Information Officer at the Department of Health, tells the Appeal.

If the hatless habits of chefs are causing more hairs in food, customers are entitled to make a complaint. Officials would then, “go out there and ask, ‘Are you guys wearing hats or hair restraints?'” Lee assures me. But in the end, “it’s not really a high priority,” he says.

“I would think that finding a hair in food may be very self-corrective, but we’ll see,” Shields says, laughing a little.

The more I hear the issue discussed, the more trifling my concern seems. In the end, I have to say hats off to the hatless chefs who still manage to keep their strands to themselves.