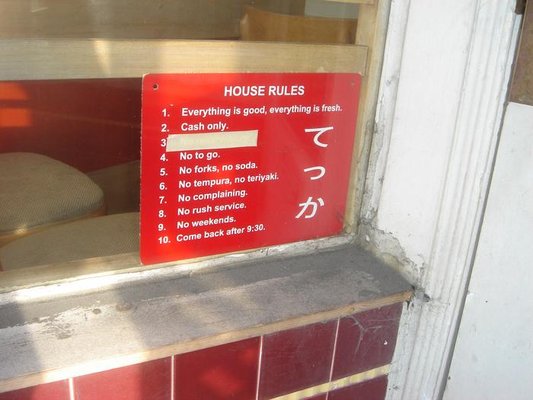 a sensational sushi place out in the Richmond that has devoted customers waiting outside the door for as long as an hour. A couple of caveats: incredibly small; a strict list of rules ranging from “No complaining” to “No fork, no Coke”; and not open on weekends.

One more thing – I can’t give you the name. First, because it doesn’t appear to have a name on the front. And second, when I asked if I could mention them in The Chronicle, I was given an emphatic one-word answer – “No!”

Talk about service journalism! Well, what Nevius could not do for you, RichmondSFblog will: after posting on Nevius’ little mystery, a reader sent them a picture of a restaurant we think might be the place.

Named Tekka Sushi, we can find discussions of the place going back to 2001, but Tekka has clearly been there for far, far longer than that. According to Urban Daddy, it’s a mom-and-pop shop “that’s like a trip to your fussy Asian aunt’s house.”

It is perhaps worth noting that the only rule we could find nearing the Nevius-quoted “No fork, no Coke” was their “No forks, no soda.” Almost the same thing, just a bit less Engrishy, eh?