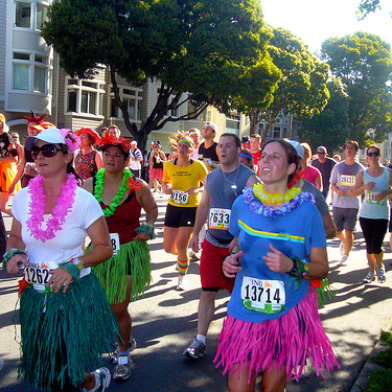 If you’ve never been to Bay To Breakers you’ve probably never had to set an alarm on a Sunday so you could make sure to get up in time to drink. At this point, everyone is still pretending they don’t want to start drinking at 8 a.m., which basically consists of walking around with champagne in one hand and coffee in the other, and then finally getting rid of the coffee.

You watch the race. The people at the front look like real runners in silly costumes. The people at the end look like dachshunds at the Weiner Nationals: they don’t seem to know which way to the finish line and are either chasing each other in little circles, or sitting down in the track.

A man has roused his three small children from bed, and they are out on the corner with pots and pans ready for mom to run by. They look so adorable that you immediately feel guilty for even looking at them, sure that their dad is hoping they turn out better than you did – drinking on a street corner at 9 a.m.

The whole day is basically a huge game of musical clothes. I took your cape, you wear my crown, here’s my sweater, give it back, wear my leather jacket, that looks good, I lost my sweater, I like your spandex, here, hold my light saber, let’s take a picture, and on and on and on.

Now you’re walking again. You have to pee, but the lines at the porta potties are at least 30 people long, and you start to get really irritated at the ease with which men are peeing on trees. Those trees are sexist you think. You want to pee on a tree. Have you ever wanted anything more than that? But you’re not really sure you have the guts for the al fresco bathroom so you decide to hold it for the next 10 hours.

Interestingly, when you first heard about this event you thought people were saying, “Beta Breakers,” and you had wondered why everyone was getting so excited about a chemistry convention.

You’re not thinking about that now, because you’ve spotted an abandoned shopping cart up ahead. You would like to get in it. You get in it. This is fun you think. I could sit here all day. You get out of the shopping cart, because your group, which has dwindled to only two, is walking quickly away. They don’t understand that when someone gets into a shopping cart someone else is supposed to push that person.

You see an adult baby sucking dejectedly on a pacifier, as he makes his way down Fulton. A girl at the bus stop brushes a leaf out of her hair and smiles at a squirrel. You wonder how it ever got to be 3 o’clock.