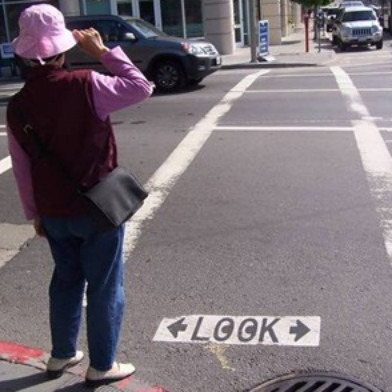 There is nothing that appears to confuse San Francisco drivers more than a pedestrian in the crosswalk. They will look at you with this particular kind of uncomprehending yet accusatory expression (which is a very difficult expression to make indeed) like they’re trying to play some awkward intimidation game with you, and it’s like honestly sir you are driving two tons of steel, you win. This is not some fucking urban version of David and Goliath, I just want to get over to that sidewalk with both of my kneecaps.

Many drivers have actually ceased stopping at intersections altogether, as though those annoying red octagons that they’re seeing everywhere denote ‘Sort of Slow Down’ zones. Drivers will often not even check to see if anyone’s coming, because they play hide and go seek the same way I did when I was three: if they can’t see you, you aren’t there.

When they do deign to stop, usually once they are in the middle of the crosswalk anyway, they’ll give you a little wave like they’re doing you some kind of favor, and could you and your one-legged dog please hurry it up.

Sometimes, they will laugh and mouth “Oopsie,” like, I just almost killed you, isn’t that twee? Maybe next time, Pedestrian, you could get a bumper sticker that says My Other Car is a Wheelchair, and stick it to your forehead.

What makes this all the more dangerous is the sheer number of Priuses in this city. Priuses are good for a lot of things like not using a lot of gas or feeling smug, but what they are not good for is making enough noise so that pedestrians know that they’re coming. If a Prius hits a pedestrian in the crosswalk and no one’s around to see it, does it make a sound? No.

The only safe place to cross a street in San Francisco is near a school. At least children get the privilege of a crossing guard. Of course, since it’s never advisable to spend an inordinate amount of time hanging around school children, you’re pretty much on your own.