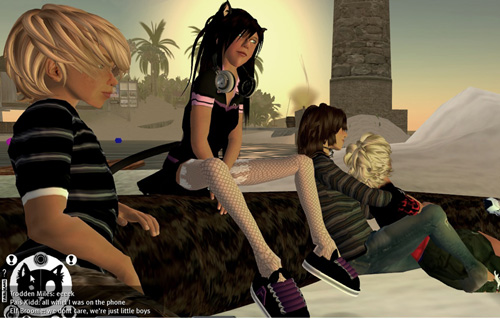 Second Life, created by the San Francisco based Linden Lab, allows users to virtually create a second life of infinite choices. Users can create an avatar that mirrors themselves or even create someone completely different. The documentary follows four people, their experiences with Second Life and how they’re using it to find love, make money or channel a different part of themselves in a way possible nowhere else. The film goes beyond advertising the game or even ridiculing the users playing. Spingarn-Koff’s documentary brings up the notion of the line between virtual and real and just how thin that line may be now.

The Festival requires a hold of reviews of the documentary so come back later for a full recap. However, what I can elaborate on is the discussion panel held after the movie.

The panel consisted of Second Life creator Philip Rosedale, Spingarn-Koff, “Aya,” a psychiatrist of internet behaviors and journalist who appeared in the film. Also in attendance was a second audience of Second Life users joining from in-game. The discussion held was on internet addiction which, although is not the focus of the film, is a topic that comes up often after watching it.

Taking questions from both of the “real” audience and the virtual one, the panel tackled on questions about addiction, resources and some of the themes portrayed in the film. Through out the discussion, we were greeted by the typed commentary of Second Life users upon hearing the panel speak through microphone. The most memorable moment of the panel was an actual Second Life user in the “real-life” attendance at the Kabuki declaring how far Second Life is beyond a game.

Unfortunately, Life 2.0’s last screening was Sunday so be sure to keep an eye out for a wider release in theatres in the near future.