SFIFF: 20,000 Leagues Under the Sea with Stephin Merritt 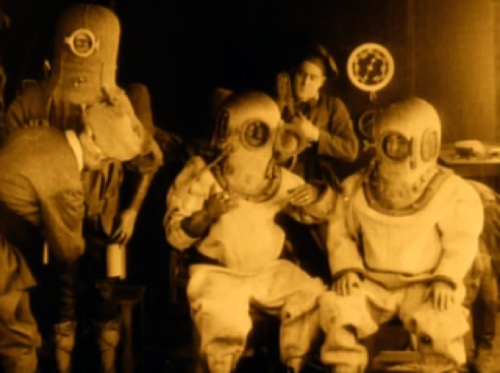 Well, if you ever need to completely sell out the Castro Theatre on a Tuesday night, Stephin Merritt is your man for the job. As part of the San Francisco International Film Festival’s Live & Onstage program, Stephin Merritt premiered his score to the silent film 20,000 Leagues Under the Sea.

Upon arriving about an hour early, the rush line was almost to the end of the block with the actual ticket-holders line even longer. Its not surprising, the SFIFF’s event of having an artist perform an original score to a silent film is an audience favorite.

Director Stuart Paton’s 1916 film is about marine biologist Professor Arronax searching the seas for a mysterious sea creature before being captured and later befriended by Captain Nemo, a former prince escaping persecution by roaming the bottom of the sea in his submarine.

Magnetic Fields singer and songwriter Merritt, along with author and friend Daniel Handler on accordion, and the Castro Theater’s acclaimed organ player David Hegarty brought an excellent accompanying score to the film, adding vocals and humor to the silent movie.

Merritt was the perfect match for the film. He turned otherwise long, black-and-white, aimless scenes into moments of exploration, both for the characters in the film and for us in our seats.

Now, I’m going to admit that I’m not a silent film connoisseur but the 1916 film had some slow, dull confusing moments. However Merritt was able to give flavor to the overall film by filling in vocals for some of the characters and singing songs that went along with the scene at hand. My personal favorite was the “I Don’t Want to Wear Pants” jingle with Handler as the voice of a female character in the film.

Merritt’s knowledge of films and scores was obvious through out the entire 8-part film.
As the credits rolled, I’m sure that Merritt was everyone’s favorite person of the night.