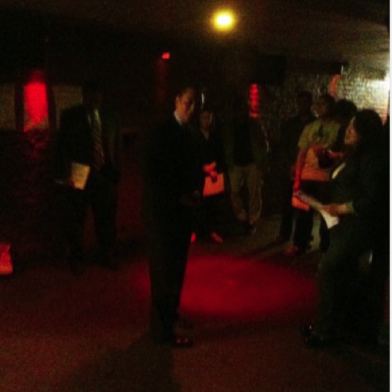 I have no idea why I went to the San Francisco Young Democrats May Meeting last night. I guess I was hoping featured Speaker Jeff Adachi, Public Defender and recent star of Willie Brown’s flawless Sunday column might say or do something scandalous. Either that or wear a form fitting t-shirt.

I attended with my beloved Brock Keeling, the editor of SFist and frequent patron of the meeting’s location, Mr. Smith’s.

“It’s on the corner of Piss and Heroin.”

Pensions? I was hoping for a tirade on shady drug labs and Kamala Harris and how the jails and prisons must be ripped open because the DA’s office is “unethical” and “inexcusable!” Jeff Adachi’s been all over the news lately, and not for his stern stance on pensions. This was going to be a long meeting.

First we had to hear all about the evils of PG&E and its unclean energy. I couldn’t help but stare at the soiled brick walls of Mr. Smith’s basement and think of the pioneering work of Erin Brockovich.

Next up was Democratic candidate for Governor, Peter Schurman, the founding Executive Director of MoveOn.org. Who doesn’t love MoveOn.org? I was excited to hear him speak, until he actually started doing so, at which point I started mentally creating personal to-do lists and wondering if anyone was breaking into my car. I’m all for having brilliant, young wonks running everything. But if you’re going to be run for Governor of California, put on a suit and practice a speech.

I was jolted back to reality when someone asked, and I’m paraphrasing here, “Since there’s no way in hell you will ever beat Jerry Brown, why don’t you go and work on his campaign?”

This is why I love the Young Democrats so much. They truly care and actively listen and are socially awkward enough to have no problem bluntly asking some longshot a pointed, challenging question in front of (two dozen) people.

After Mr. MoveOn made us all give him our email addresses (enjoy, eve@sfappeal.com!), Volberding took the floor to “Fix Muni Now.” Brock had discovered the Costco croissandwiches by this point, and was distracting me with his culinary reviews while the rest of the room bitched about buses. If you want to get a room of casual dressed San Franciscans riled up, bring up Muni. You’d think they were trains to hell. One woman, who we came to refer to as Squeaky Fromme, hollered, “Isn’t this called union busting?”

To which the whole room broke into British Parliament-style stomping and grumbling and banging their gold-handled canes on the floor.

Jeff Adachi had arrived by this point, and we stood around waiting for Supervisorial Candidate in District 10, Chris Jackson to show up. It finally occurred to me that we all had to wait for Jackson to show up because he’d be debating Adachi on this whole pension issue.

Oh, a debate! It might not be cocaine and criminals, but it’s something.

Chris Jackson finally rolled in, and the Public Defender went first, with his pitch to cut the enormous burden of employee pensions. The budget is ridiculous, the economy sucks and if we keep going at the current rate, there’ll be no pension fund left anyway.

Chris Jackson was up next, pointing out that the economy sucks because of Lehman Brothers and Citibank and by the way, his mom has a pension.

I give Chris Jackson a hard time, but God bless him, he was up there going toe to toe with seasoned veteran Jeff Adachi. And it was fun to watch, these two gentlemen making their cases. It just went on. And on. And on for fucking ever. Brock had given up and left, and I was standing next to ubiquitous commenter and blogger Generic, who started preemptive applause to just to get us the hell out of there.

I always wonder why I show up at these events, and in fact, a few people asked how I dared to show my face at what I’ve called “nerd conventions” while the rest of you apparently spend your Wednesdays serving organic food at hobo shelters.

While kinda boring and stuffy and inevitably involving someone wearing a weathered, gathered-waist bomber jacket, I secretly love these meetings. There’s something very endearing about folks who care very, very deeply about very specific issues, be them model trains or Magic cards or pensions.