Hell on Two Wheels: The Bike is Back 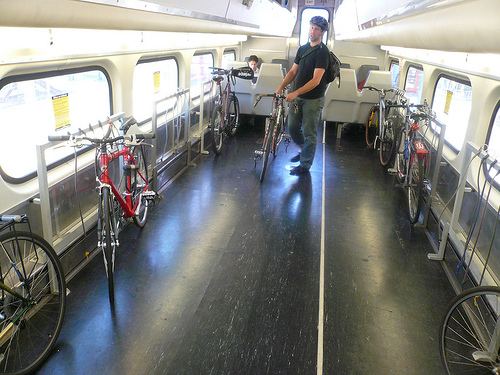 Today is the annual Bike to Work Day, so roll up that right pant leg and hit the pedals for your commute. Yes, it totally counts if you take your bike on Muni, BART, Caltrain or Golden Gate Transit. Though putting your bike on a Muni bus for the downhill leg, well, where’s the fun in that? And, yes, it’s about fun! Sexy, individualistic, wind-in-your face, font of anecdotes to tell friends fun! So just try it already.

After the rainy season, there’s been a growing trickle of local bike-related news again. The most exciting of which is the new SF Bike Mapper curated by the San Francisco Bicycle Coaltion and the Metropolitan Transportation Commission. Google’s new bike directions feature was cool, if lacking in some ways, but this new tool blends the on-the-ground experience of cyclists with the familiar shaded-grades look of the SFBC’s handy paper map and landmarks like bike shops and “Energizer Stations.” And just in time for planning that commute to work you’re going on, right?

What might not be on the map yet are the brand-spanking-new bike racks along the work-in-progress that is Valencia. And they’re even placed in the street instead of on the sidewalk, taking parking away from cars and giving it to bikes! Should come as some comfort to those riders who might have avoided the major cycling thoroughfare during construction.

And after the deal between the Municipal Transportation Agency and Clear Channel to start a bike-sharing program fell through, three of the big bike rental shops in the city have teamed up to form ParkWide, which approached the Recreation and Park Department with a proposal to build a la carte bike rental kiosks around the city, and starting a network of pick-up and drop-off points. Even better, the plan might actually make Rec and Park some money! If you love ZipCar (and this cyclist does), just imagine the bike-car-transit options this would open up, minus the responsibility owning of even a car or even a bike. Godspeed, ParkWide.

Finally, a civil grand jury has reached the conclusion that “‘If San Francisco truly wants to increase responsible bicycle use, it will need to solve the issues of anger, misunderstanding, and mistrust between motorists and cyclists, and increase everyone’s view of shared responsibility.” In other words, everyone be nice! Except for cyclists, who should be nice to pedestrians, but as assertive towards motorists as necessary for safety short of keying, chaining or fisticuffs.

On a personal note, your correspondent made a stupid, but not uncommon (at least for him), mistake last week. After running errands around town on two wheels, the final destination was near home. After locking the bike up, having some tasty bites at Pica Pica, and picking up cigarettes at the bodega, habit walked home while the bike stayed tethered to a “no parking” sign. The mistake wasn’t discovered until the subconscious compulsion to check on the bike where it should have been kicked in three days later and the realization struck like a car door to the face.

Thankfully, there was no need to take out a bike loan. Upon inspection, the bike remained, but sadly splayed out on the sidewalk with no front wheel, and it would have been whimpering if it could. Luckily, there was money in the bank! And a couple of hours and $100 later, a new and even better front wheel was firmly affixed to the frame. Yes, it’s a trendy “deep v” rim, which, ugh, but it’s lighter and stronger and sports a skinnier tire and therefore less rolling resistance, making the financial hit a little easier to stomach.

I picked up my wheel where I bought the bike, Valencia Cyclery, but I could have found a shop nearby using Yelp mobile had I locked the bike somewhere unfamiliar. And now I know that, if given enough time during a quiet hour to work, somebody will steal parts off your bike even if straight bolted and not quick release. Also, that I need to pick up some chain lube, since it’s gotten a bit rusty, and might start carrying a cable to run through the wheels. Or, you know, stop forgetting my bike and leaving it shivering out in the elements for three nights getting rusty and preyed-upon.

Jackson West has ridden a bike around the San Juan Islands, up and down the Cascades, in Vancouver, Seattle, Brooklyn, Austin and all over the Bay Area. He hasn’t given his bike a name yet, but is open to suggestions. Have any bike-related questions? Send an email!