There’s something about Baby: A Musical’s wide-eyed, big-hearted sincerity and earnest cheesiness that makes you think the musical tale of three couples going though the trials and tribulations of pregnancy will be nails on a chalkboard annoying.

But I’ll be damned if Ray of Light Theatre’s low-key, unpretentious, little musical comedy isn’t kryptonite to cynicism. Backed by an efficient three-piece band, Baby follows three couples (hip young college students who get an unexpected visit from the stork, middle aged yuppies desperately wanting to conceive and some would-be empty nesters who thought they were done raising kids) as they deal with the myriad of issues, both financial and romantic, that inevitably come when people get, or attempt to get, pregnant. 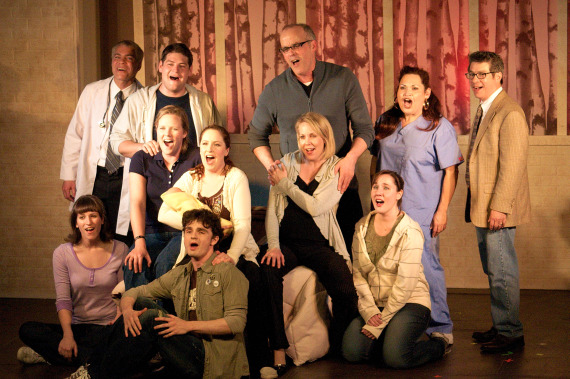 The Cast of Ray of Light Theatre’s production of Baby: A Musical

While director Dyan McBride gets generally strong performances out of her cast, Sarah Kathleen Farrell and Andrew Willis-Woodwood are standouts as the youngest couple, Lizzie and Danny, there’s a bit of a disconnect between the songs and times where people aren’t singing. Sometimes the non-singing parts of the show come off as stilted but all of the songs are as natural as can be–often in the same scene. This is primarily the fault of the script, which seems more interested in being a connective fiber linking each musical moment to the next. Luckily, the songs, which bounce from the good-natured strut of “Fatherhood Blues” to the show-stopping balladeering of “The Story Goes On,” are more than strong enough to keep everything moving briskly.

This isn’t to say that the plot is thin or the characters aren’t well drawn. Even though the story is more than a bit predictable, the characters have a surprising depth and more than a touch of emotional honesty. When the oldest couple learns they’re having a baby, their concerns aren’t logistical — being well into their sixties when the kid finally scuttles off to college — so much as they are emotional — feeling like they may never get the retirement from changing diapers and watching Scooby-Doo they feel like they’ve earned.

The show is savvy enough to acknowledge the contradiction that being away from your family while working to support them is simultaneously an act of responsibility and cowardice — when Danny realizes he’s going to have to provide for his new family he takes a gig touring with “The Bi-polar Magnets,” an emo band he despises.

When presented with her once seemingly limitless future condensing on top of her rapidly expanding belly, Lizzie complains that, “marriage turns talented men into husbands and brilliant women into wives.” It’s this feeling of sacrifice, of not being able to simultaneously have everything you want, that’s the show’s central conflict. What makes Baby succeed is its understanding that while the new bundles of joys are in the title of the show, the babies themselves aren’t really what’s important here — what matters are the relationships between the couples, and how children inevitably and fundamentally change those relationships — for better or for worse.