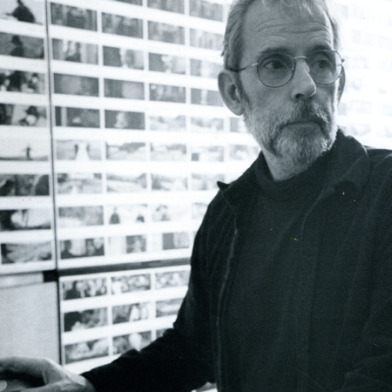 Sunday was a stunningly beautiful day in San Francisco, which of course meant I headed straight for the Film Festival so I could sit in a dark, air conditioned theater. Each year the festival invites someone influential in the film industry to give a “State of Cinema Address,” discussing issues facing the movie industry and its future. Past speakers have included Tilda Swinton and Brad Bird. This year’s speaker was Walter Murch, legendary editor of cinematic sights and sounds.

(One moviegoing tip: Never sit in the first row of the balcony of Theater One at the Kabuki, especially if you are fairly short, and the event involves seeing someone give a lecture. You will have to watch said lecture through bars, like you’re in movie prison. But the second row, with its unobstructed view, equally cushy seats, handy side tables and access to a bar? It’s a prison break into movie theater heaven.)

Murch’s lecture, which included liberal use of a Mac computer and something that may or may not have been a PowerPoint presentation, was like a really good film history class. I’ve sat through my share of boring lectures at film school, and what I would have given to hear something as engaging as Murch’s presentation. That said, it was, again, like a film class, and not quite as much of the forward-looking lecture one might expect from something billed as a “State of Cinema” address. I also think he probably had a lot more he could have presented, but being limited to an hour, the whole thing seemed to come to an abrupt end.

All editors are feminine, in that they are “cooking what the guys bring back from the hunt,”He began his lecture with a brief discussion of the iPad, and how the introduction of nifty new technology inevitably leads to a discussion of not what it can do, but what it’s missing. In the iPad’s case, it’s complaints like “Where’s the camera?” and “What, no USB port?” Thus it is, and thus it has always been, as he illustrated with a quote from Maxim Gorky, who wrote about seeing a Lumiere film for the first time.

If you only knew how strange it is to be there. It is a world without sound, without colour. Every thing there–the earth, the trees, the people, the water and the air–is dipped in monotonous grey. Grey rays of the sun across the grey sky, grey eyes in grey faces, and the leaves of the trees are ashen grey. It is not life but its shadow. It is not motion but its soundless spectre.

When presented with this amazing new technology, the immediate response is, essentially, “Where’s the color? And the sound?” It is this lack that propels invention forward. Murch talked about how even back in the beginnings of cinema, the idea of “one man, one machine,” as opposed to the community experience of movie going, was what lead to the invention of the Kinetoscope.

With the invention of the Kinetoscope came Edison’s “Kinetophone,” an attempt to record sound and image at the same time, for a synced sound movie. Filmmaker William Dickson helped Edison with this endeavor, and one of the short movies they did, sans sound, is famous because some consider it to be the first presentation of homosexuality on film.

The sound that was recorded for the film was thought lost, but the recording, on a broken cylinder, was recently discovered, and Murch was able to figure out how to sync the two, resulting in the first time that bit of film and audio had been heard in over 100 years, and, in fact, the ONLY time the sound and image were ever synced correctly.

Murch then went a little further back in time, discussing the three artists he felt helped pave the way for the birth of cinema: Beethoven, whose music was influenced by the chaos of nature, and not something like the controlled art of architecture that had influenced previous composers; Gustav Flaubert, whose prose introduced realism to fiction; and, of course, Edison, the inventor who brought cinema to the masses. According to Murch, it was the collision of “dynamism and realism” that gave birth to movies.

It was about at this point that the lecture came to an end, and he took questions from the audience. Unfortunately, he seemed to miss the point of several questions, interpreting one woman’s comment about how “fast” editing and cuts are these days, and whether he thinks those fast cuts are rewiring how we think, as a question about how long it takes to edit movies now compared to 20 or 30 years ago. (He said there isn’t much difference in production time.)

Another question about where he saw Ada Lovelace, who invented the first computer language, fit into his timeline of influences towards the birth of cinema, he mistook to be a question about when computers where first introduced into the filmmaking process. (Someone later pointed out his mistake and he admitted he had never heard of Ada Lovelace, but would be sure to look her up. Probably on Wikipedia, like I did.)

When asked about Dede Allen, who recently died, and how women have been able to carve an influential spot in the field more readily then in other aspects of filmmaking, he joked that all editors are feminine, in that they are “cooking what the guys bring back from the hunt,” and “dealing with their tantrums.”

He ended the lecture with the presentation of a graph, illustrating the commonalities and differences between cinema, theater, video and dreams. Cinema and theater are community based, but only one is a repeatable experience. (No two theater performances are the same.) Video is repeatable, but is historically a “private” experience (TV, DVDs). And dreams are unique, but entirely private. Ultimately, in the center of it all, in potential, if not actuality, he places games, which can encompass all those aspects. And it was refreshing to hear him discuss this potential future not with disdain, but with excitement about the possibilities.