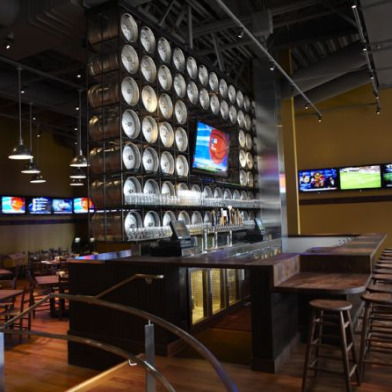 These are all words my constant companion Brock Keeling uses to describe events when inviting me to be his plus one. Last night was the opening soiree for fancy pants chef Traci Des Jardins’ new ventures, Public House and Mijita which are now open in the old Acme Chophouse space at the ball park.

Brock didn’t need to sell me with the glitz, the glamour and whimsy. This party had complimentary valet parking, a treat so elusive and convenient, I’d be hard-pressed to find any excuse not to take advantage.

I arrived at 24 Willie Mayes Plaza a little late, not that this was a problem what with the…you guessed it! Complimentary valet parking, and raced through the rain to meet my friends at the bar.

The Appeal’s Eve and Tim were sipping fancy cocktails with Brock at the packed bar, and I scoped out a free booze specialty drink menu printed just for the occasion. Martinis and Manhattans? I can’t help but notice that the second I quit drinking, I’m suddenly getting into alcoholic’s paradise on the regular. I asked for a Diet Coke and took a look around.

Public House is basically a fancy sports bar. There’s an entire wall of beer kegs with a flat screen in the middle of it. I get the feeling no one’s flipping the channel to Lifetime. Connected to Public House is Mijita, the fancy taqueria. And apparently you can bring food from both into ball games. If you go to ball games. Or Dave Matthews Concerts.

Charming servers kept working their way through the crowd with passed bites of food, including the always popular slider, funky quesadillas and fried jalapeno poppers, which came with a casual warning. “Some people mentioned these were really spicy.”

Eve, Tim and I each took a jalapeno popper, and Tim bit right into his.

He turned bright red before he managed to say anything. “This is the hottest popper in the world. Seriously, you guys.”

I rolled my eyes. Tim, you gringo. It’s bar food.

Eve took a bite of hers. “Jesus Christ!”

You’d think with two guinea pigs going before me, I’d trust their reactions. “Beth, it’s too hot. I’m still in pain. This is burning my insides.”

To which I looked at both of them, lifted that little jalapeno to my mouth and paid the painful price for the next 20 minutes.

I spotted Jay and Chloe from SFist, but was truly star struck at getting to meet Chubby and Gutenberg from Bunrabs, who write a fabulous food blog and manage to swing by French Laundry seemingly whenever they feel like it.

Orson’s Elizabeth Faulkner was also in attendance, although she’s kind of everywhere. You can go pretty much anywhere in San Francisco and voila. There’s celebrity chef Elizabeth Faulkner. Tim saw her at Pets Unlimited. The thrill is gone.

I headed home not long after, the lure of the free valet experience too strong. But before I split, I needed to find Brock and thank him for hooking me up.

“Oh. You mean the French Leave?”

Under the guise of not making it all about you, the French Leave is sneaking out of a party without telling a soul. Suddenly, knowing it had a name made the French Leave totally acceptable to me. Still, I said my farewells and (pause) had the car brought around.

Thanks Traci and crew!

Needless to say, the next time I get dragged to a Giants game, I’ll be swinging by the Public House and casually requesting they switch it to Lifetime.