Originating from the UK, famous, admired, despised (and wanted) street artist Banksy has left mark(s) in many cities around the world. With the recent opening of controversial documentary Exit Through The Gift Shop revealing Banksy’s life of art and crime, its limited release in select US cities may have facilitated the artist visiting each major city the film opened in to leave a Banksy piece at the time of each opening. On the West Coast, Los Angeles got a couple, Seattle allegedly received at least one, and locals estimate that San Francisco was hit six times.

Banksy has a lot of fans in San Francisco — as the pieces appeared, people who spotted them expressed both excitement and delight. We’re sure the property owners may not feel the same way (unless they “monetize it” like this man in London did, capitalizing on the worth of a Banksy as fetched by art collectors).

On Thursday April 22, Kat Cuffe caught the Chinatown piece, while Rebecca Morehiser shot it when the paint was still wet (9:33 AM) — the find was officially broken by Warholian, who has extensive Banksy SF coverage. At the same time across The City in the Mission, Erin Archuleta got to work only to be surprised by a fresh Banksy across the street from her office at Valencia and 20th, and got the first post up.

Friday April 23rd saw Scott Rafer finding the “Native American” Banksy (again in the Mission) on the side of Cafe Prague on Sycamore. Meanwhile, SOMA residents and workers awoke to a new Banksy at 9th and Howard, discovered by Jean Hackman.

The last two were collectively found: all were photographed beautifully in this Flickr set by Thomas Hawk.

Each new SF Banksy has been named, mapped and documented here in great detail by Warholian Pics (video via). 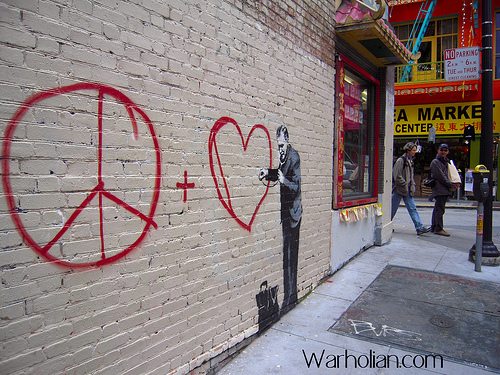