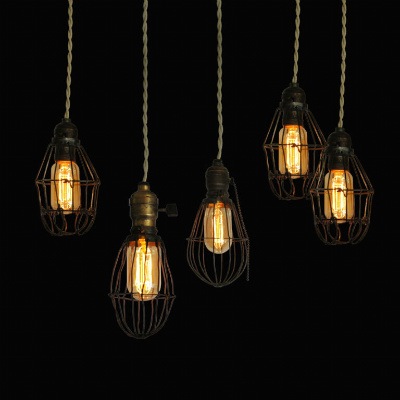 Yeah, we all like light, it helps us see things, and if we’re a cat we like to lay in a patch of it and lick ourselves for hours at a time without making any discernible difference to the cleanliness of our coats, and if we’re a San Franciscan we like to buy antique looking “Edison” light bulbs.

These are like regular light bulbs only clearer, and prettier, and more like the kind of bulb people used when light wasn’t taken for granted. They also cost 18 times as much as a regular incandescent bulb, but come on, a recession is not the time to scrimp on antiques.

San Franciscans like these bulbs so much that they really don’t care if they actually emit the thing that is the first part of their name or not. If a San Franciscan picks up the latest edition of ReadyMade and sees that some design genius took a whole bunch of antique light bulbs and threw them into an old fishing net and hung it from the ceiling and called it macaroni, the San Franciscan will almost always be inspired by the thought of the tragicomic political statement that this chandelier could make above their own dining room table.

Sometimes when I’m about to throw away a broken bulb, I’ll look at it for a minute and think to myself that instead of tossing it I should put it in a box somewhere and save my future grandchild 20 bucks.

I never do this, but that’s only because I’m still pissed at all the past grandparents of mine who didn’t save their light bulbs for me. They may have grown up in the 30s, but I could teach them a thing or two about the Really Great Depression that I go into when I think about how much it’s going to cost to fill this fucking fishing net with busted light bulbs that cost $18 a pop.