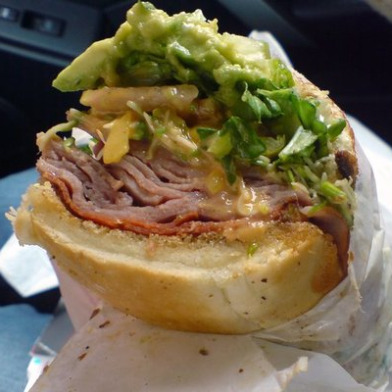 That makes Ike’s the people’s choice, and this sense of ownership mixed with fervor has brought repercussions. On one recent Saturday afternoon, the crowd was so big that the sidewalk was impassable. – New York Times

At Ike’s, the 16th Street sandwich shop that could, San Franciscans are willing to wait for hours in a line that stretches around the block just so they can get their special sandwich.

One of the reasons it takes so long to make a sandwich at Ike’s is because they take the word “make” pretty fucking literally. The bread, be it Sourdough or Dutch Crunch, but never banana, isn’t baked until the moment after you order your Peg Bundy. It’s like going to get your oil changed, and the mechanic tells you that they need to send Sam out to the derrick because they only serve oil made fresh to order by the Earth.

For some reason this kind of thing appeals to San Franciscans because they love places where it seems like people are taking an inordinate amount of time to do something relatively simple. San Franciscans are even more into delayed gratification than fundamentalist Christians.

Of course, after you’ve waited in line for so long that you’ve missed your toddler’s high school graduation, you’re not gonna be content to have some regular old sandwich with meat and lettuce and stuff. You need to have it topped with jalapeno poppers, or I don’t know, mozzarella sticks!

People wonder why Americans are so fat, and it’s like not that freaking inconceivable when they are eating breaded cream cheese on top of regular cheese on top of meat, wrapped in a loaf of bread. You hear the term “food coma” get thrown around pretty casually these days, but Ike’s is more like a regular coma with some food on top.

The only people who hate on Ike’s are people who are jealous of the people at Ike’s, and they are almost always the kind of people who claim not to snack between meals.

Sometimes these people, and I will not say who, but it’s me and my boyfriend, will wake up at 8 in the morning just so they can drive by and glare at all the people already lined up to get a Nacho Girlfriend or The Pizzle, with some “extra brie” (is there any brie that’s not fucking “extra”?) and these people will be like “I hate Ike’s. Let’s go drink vodka in Dolores Park and get burned on one side of our faces and frown because we’re too in love with our hipbones to eat today,” and really aren’t THOSE the fucking worst kind of people in the entire world?

Probably not according to the people who accidentally rented apartments near Ike’s.