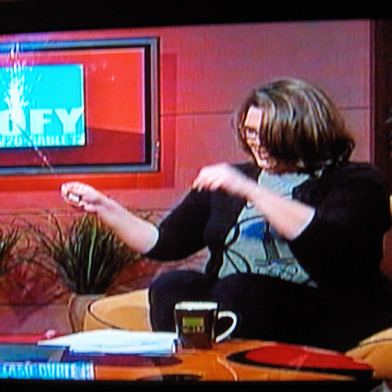 This is America. And the Constitution clearly states that everyone gets to be on television.

Which is why I’m spending this week guest-hosting KOFY-Talk on KOFY-TV20! Somehow, I managed to talk my way into this gig and the story goes a little something like this:

The VidSF Weekend What’s Up, which you can see here on the Appeal every Thursday, appears in a shortened version on KOFY, which in San Francisco is Channel 13. I have no idea how this happens, but based on the occasional Facebook “Did I see you on TV?” message, I delight that our little 60-second show is actually ending up on the boob tube.

Thanks to the help of the gentlemen of VidSF, I wormed my way into a meeting with KOFY and badda bing! I get to host their daily 1-5 PM block of Jerry Springer and the Steve Wilkos Show all this week. Needless to say, DREAM. COME. TRUE.

Steve Wilkos, if you’re unfamiliar, was the head of Jerry Springer’s security team. Having garnered a certain level of fame himself, Steve was given his own show. Like I said, this is America. Every weekday, KOFY features The Steve Wilkos Show at 1 and 3pm. The Jerry Springer Show is on at 2 and 4pm. And every other commercial break or so, there I am sittin’ on the KOFY couch trying to come up with quips.

I arrived at the KOFY studios, located on the other side of the freeway at Potrero and Cesar Chavez, and right away was offered primp-time in the KOFY Green Room. The Green Room is basically a bathroom, but it’s been pimped out with the light bulbs around the mirror, the scary mask from Creepy KOFY Movie Time, a clothing rack and a can of hairspray.

I was in complete heaven.

As soon as I was ready (I just stood there giggling and texting my mom), I headed into the studio where I met the crew and caught up with Brandy, the Sales Promotions Manager. I sat down on the KOFY couch and looked over the script. Basically, three times an hour, I host little 10-30 second segments either introducing the next show, announcing a contest, plugging upcoming KOFY programming or, my personal favorite, wishing Happy Birthday to certain KOFY-Club members while waving a lit sparkler.

Filming these little segments is harder than it looks, at least for me. A lot of the script just said, “ad lib.” I’d prepared little facts and figures about Wilkos and Springer, but even with an arsenal of ad lib material, I was nervous. I didn’t know where to put my arms or legs. Sitting on a couch has never been so complicated, so confusing. And I could only see myself on TV once we started filming, so as soon as I started talking, a little TV across the studio would go on and there I was! I’m unable to enter a KwikMart without looking for myself on the security monitor. That TV across the studio was getting the best of me.

Also, Brandy was really my only audience. Crew members Bob and Sam were in another room, putting the magic together. But unless I screwed up my microphone (frequent), it was just Brandy and me in that huge studio. It feels weird enthusiastically ‘tossin’ it to Morris up next at the top of the hour with Punk’d’ to an audience of one looking at her stopwatch.

What I’m trying to say is, it’s taking me a couple of segments to find my groove. I’m nervous and excited. Historically, that’s been a dangerous combo for me. But if you’re home this week, I hope you tune into KOFY and check it out! And then, if you’re so inclined, let KOFY know RIGHT HERE that you just love that crazy new lady.

Never in my 32 years did I ever imagine I would get to announce on local television that Jerry Springer was about to begin. I can’t stop smiling. God Bless America.