Hell on Two Wheels: Let Me Google That Bike Route For You 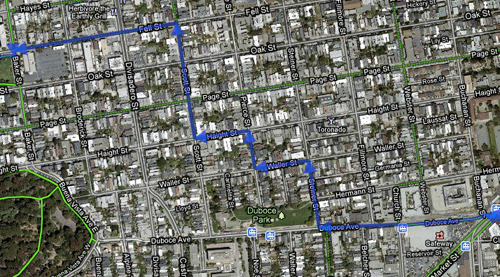 Last week at the National Bike Summit, the surprise appearance of Transportation Secretary Ray Lahood was big news. But the possibly bigger news was Google’s unveiling of bike directions for Google Maps. Just to give you a sense of Google priorities, it first introduced driving and pedestrian directions, then public transportation, and now, finally, bikes. Way to put the car before the horse human, Google!

I kid because I love (and fear) Google, which had been testing the new bike maps internally for a while before asking for data and input late last year and then releasing it last week. (The company so fetishizes the college campus experience at places like the founders’ alma mater Stanford, where bikes are used regularly to get around, that it maintains its own bicycle sharing program.)

The first thing I noticed is that the color scheme — green bike-friendly paths overlaid over the regular street grid — was instantly recognizable from the maps issued by the San Francisco and East Bay Bicycle Coalitions. What it lacks that those maps have is easy grade indicators, such as inline arrows, that easily describe the direction and difficulty of the grade, though Google has this data as Cycleicious determined by plotting a round-trip in Santa Cruz that went uphill and then downhill. The estimated time for the uphill trip was calculate at a lower average speed than the downhill trip, which makes perfect sense for students of cycling physics.

It’s not the first application to help cyclists navigate — an independent MetaFilter Project by one Amar used Yahoo maps to accomplish the same goal, though obviously with fewer resources. Of course, cyclists being the utopian idealists that we are, the suggestions didn’t stop at better aping the style of existing maps from local bike clubs.

For instance, where’s the application for mobile devices? I’ve said that mobile computing is one of the best things to happen for cyclists in the last ten years, and it’s not as if there’s a shortage of iPhone applications that cater to the needs of cyclists (I recommend Flashlight at least for night rides, especially if you have an on-bike iPhone charger). And not only did it not recognize the Wiggle on rides between the eastern and western neighborhoods in San Francisco, it didn’t recognize the alternative McAllister climb, either.

My suggestions? While it’s decent at recognizing low-traffic routes and bike paths, and shows landmarks, those landmarks don’t include bike rental and repair shops where you might be able to fix a flat. Also, bike directions and transit directions aren’t integrated, meaning you’ll still have to do quite a bit of planning if you want to use public transit with bike storage and racks to take trips farther afield, such as car-free camping.

But give them time. Like everything Google, it’s in beta for the foreseeable future. And just like a new bike, it needs to broken in and tuned up some. Still, it is progress, and might help those who don’t know the best bike lanes and paths find their way into every day riding. And to send Google feedback directly, you can report a problem by clicking the link in the lower-right of the map view, just to the left of the zoomed-out inset view.

I still think that the Daft Logic tool for calculating distances using Google Maps that I mentioned in my inaugural column is quite handy, especially if you want to know how far an unplanned ride took you, and not just for bikes but for runners and pedestrians as well. Any sites or applications you recommend? Please do send an email or post a comment!

Jackson West has ridden a bike around the San Juan Islands, up and down the Cascades, in Vancouver, Seattle, Brooklyn, Austin and all over the Bay Area. He admits to being online more than on a bike the last few weeks. Have any bike-related questions? Send an email!