Hell on Two Wheels: Making It Harder To Get Your Bike Stolen 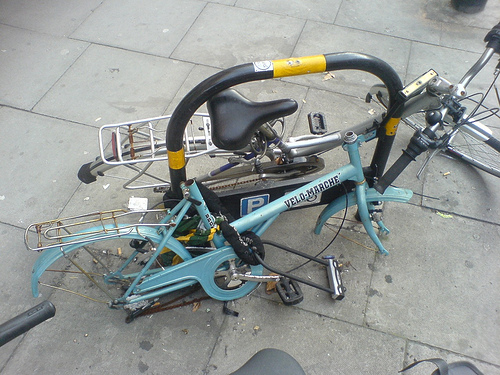 I’m not one to avoid “bad neighborhoods,” on my bike or otherwise. But on Saturday I rented a ZipCar to help a friend move some stuff, and rode to the pickup lot at 5th and Folsom on my bike. I have to admit, leaving my bike for four hours in corner of the city known for energetic tweakers with lots of spare time and little cash near a bustling trade in hot property on Market made me a bit nervous. Thankfully, I’d taken a number of precautions to make sure that I didn’t return to the lot only to have to walk home.

Bikes are quite attractive to steal. After all, they come with their own getaway vehicle. Largely standard fittings mean a brisk black market in wheels, seats, lights and other bicycle parts, not to mention the recycling value of anything aluminum on your ride. “Quick release” parts might as well be renamed “EZ Steal,” and there are many locks on the market that offer little or no protection to even amateur bike burglars.

Anything that looks like easy work for a pair of bolt-cutters — including cable “locks” — is a bad idea for bike parking
The first task was to find a suitable thing to lock my bike to. I have a small U-Lock that fits snugly around the head-tube at the front of a bike and a standard parking meter pole. (Ironically, as meters are upgraded to the new electronic versions, the city is going to lose a lot of bike parking.) The important thing is that I didn’t leave much room between the lock, the anchor point and the bike for someone to pry the lock open with a lever.

The rusty chain-link fence was a non-starter, and generally anything that looks like easy work for a pair of bolt-cutters — including cable “locks” — is a bad idea for bike parking in San Francisco. One of my concerns about the Folsom location was that the fast, heavy traffic doesn’t make it particularly pedestrian friendly, and you can’t expect a driver going 35 miles an hour to notice someone jimmying a bike lock on the side of the road.

Well-lit areas with heavy foot traffic are the best place to look for a parking spot, though its no guarantee anyone will notice or care. And don’t leave bikes parked outside overnight — the wee hours of the morning is prime time for prowlers.

Finally, if your bike does have quick release components like wheels or seats, and any other accessories like panniers, tools or bags, remember that what can be removed probably will if your bike is left unattended. Quick release is really meant for suburban cyclists who are driving their bikes around a lot (or racers need to make quick wheel swaps). You’ll want to use a chain lock and thread it through both wheels, even removing the front wheel to set it next to the back wheel. And always have one point of any lock going through the middle of the main frame.

But even barring proper equipment, location, time and “technique,” there are also ways to at least minimize your loss in the case of a theft. The first is through insurance, and the second through registration.

When buying a lock, look for companies that offer insurance in the case of a stolen bike. My lock covers my loss up to $500 if it’s broken as part of a theft. Additionally, Renters or Homeowners Insurance may cover the theft of your bike even when not at home. If you’re reliant on that, however, it’s important to document ownership of your bike through photos, receipts and records of the bike’s serial number.

And its that serial number that you’ll want to register, since if you don’t have documentation of ownership, even if the San Francisco Police Department recovers your bike, they won’t be able to return it to you. The National Bike Registry will put your serial number in a database police can access, so that even if your bike turns up across the Bay in Oakland or beyond, it will be identified as yours and returned.

While it may be tempting to go vigilante on a bike thief like a recent case in Los Angeles, better just to report it to police, post a notice on Craigslist and maybe your friendly neighborhood blog to let other cyclists know to be on the lookout. More tips can be found in the San Francisco Bicycle Coalition’s handy guide to theft prevention.

Jackson West has ridden a bike around the San Juan Islands, up and down the Cascades, in Vancouver, Seattle, Brooklyn, Austin and all over the Bay Area. He’s lost one and a half bikes to thieves. Have any bike-related questions? Send an email!