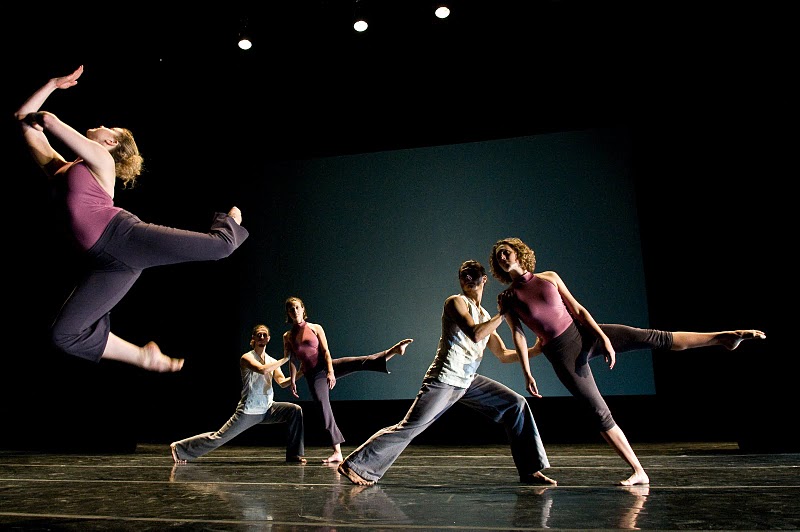 Hope Mohr Dance takes the stage at Theater Artaud this weekend with three nights of multi-generational (although surely not geriatric) dance in an evening-length program aptly entitled “Three Generations.”

In addition to her own premiere, Mohr shares the limelight with Molissa Fenley and Yvonne Rainer. Fenley’s a a 2008 Guggenheim Fellow, Rome Prize winner, and widely respected choreographer who’s based in New York. Her new solo work, Mass Balance, is accompanied by Turkish-born Bay Area composer Cenk Ergun‘s music.

Rainer’s Trio A, referred to as a landmark in dance history, rounds out the bill, and will feature Mohr, who will be performing for the first time after the birth of her two children, and Robbie Cook, who has worked with choreographers Deborah Hay, Liz Lerman and Margaret Jenkins, among others. A Bay Area native, Rainer was one of the founders of Judson Dance Theater, which is widely recognized as “a groundbreaking collective of artists” that spurred creativity in dance and performance at the Judson Memorial Church in Greenwich Village between 1962 and 1964.

In advance of her third season, I caught up with Mohr.

Becca Hirschman: I read that, as a young girl, you saw The Nutcracker and that lit a spark within, so to speak. How did you get to the place where you said, “I want to be a dancer”?

Hope Mohr: I have wanted to dance and identified as a dancer ever since I can remember. I don’t remember ever not feeling this way. I’ve always felt a calling!

Between the time when you were young and when you went on to dance with Trisha Brown’s company, you went to college, served with AmeriCorps, and pursued law school. What pushed you to return to your dance roots?

I made many detours away from the path of dancing, but I finally heard–and listened to–the voice inside that was still saying, “Dance!” I had to return to dance to be true to myself.

You grew up in San Francisco. What brought you back here?

I was ready to focus on my own creative path after many years of dancing for other people in New York. For me, San Francisco offers a unique combination of creative space and personal support. After 9/11, I re-evaluated my priorities. Family felt increasingly important. My family and my husband are in the Bay Area.

What motivates you to create new work?

Passion for movement, the desire to excavate my creative voice, and the belief that through the arts, we can affect how people see the world.

How would you describe your movement style or aesthetic?

For readers who aren’t too familiar with Cunningham’s and Brown’s styles, would you give a quick overview?

That’s a tall order! Cunningham is athletic, formal, rhythmically complex modern dance that demands the technical precision of ballet in the lower body with a mobile spine and torso in the upper body. Trisha Brown is known for her fluid, articulate, post-modern style.

Your home season includes the premiere of Far From Perfect, which is described as exploring forgiveness and the creative process and how each compliment or affect the other. Would you tell me a little more about the work?

The work explores the cost of holding a grudge–withholding forgiveness–and the transformations that can occur when we let go of resentment. The work combines this psychological exploration with exploration of the creative process through the work of painter Agnes Martin, an abstract expressionist whose luminous, minimalist grids feature the endless repetition of delicate, hand-made strokes.

Martin wrote extensively about perfection and transformation, and believed that the task of the artist is to conjure memories of moments of perfection. Wrote Martin, “[My] work is about perfection…but the paintings are very far from being perfect–completely removed in fact–even as we are ourselves.”

Through imperfection, we forgive. But out of our pursuit of perfection comes art. I’m interested in the tension that arises when these drives meet. Some questions the work addresses are: What can dancing bodies reveal about the cost of holding a grudge, and the transformations that forgiveness offers? How can we embrace each other despite imperfection? How can we surrender to the creative act in the midst of imperfect conditions/chaos?

This weekend, you’re also featuring two other choreographers, Yvonne Rainer and Molissa Fenley, on the bill. What prompted you to share the stage with them?

I’m calling the program Three Generations. I wanted to pay homage to choreographers who have influenced my work and to put my work in context. Molissa was my choreographic mentor through the 2009 Choreographers in Mentorship Exchange program (CHIME), a program of the Margaret Jenkins Dance Company that is a mentorship program for professional choreographers. Grants and cost-free studio time are given to support an exploration between artists interested in learning from one another.

Yvonne was a leading figure in the Judson Church cadre of choreographers, three of whom I danced for in New York (Trisha Brown, Lucinda Childs, and Douglas Dunn). Like many choreographers, I am indebted to Judson Church. But my time spent dancing for many Judsonites makes me particularly indebted to that aesthetic lineage. The ideas and changes it introduced to the dance world—postmodernism–are still challenging and salient.