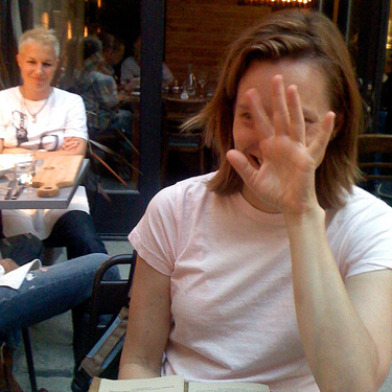 When they go to places where they know the owner they feel superior to everyone who they feel probably does not know the owner, and therefore is not as cool or as in the know [of the owner] as they are.

They will typically greet the owner with a kiss on both cheeks to demonstrate how European they are and also the fact that they know the owner well enough to kiss him/her on the face, but if they go to the wrong side first they might end up having an open mouth moment, which can be embarrassing, and people in San Francisco hate to be embarrassed.

So, obviously this whole face-kissing thing is a minefield. Sometimes a San Franciscan will choose to just stay home rather than go out and risk kissing an owner inappropriately.

When people get to know the owner of a restaurant/tattoo parlor/medical marijuana dispensary they like to go there as much as possible so that they can become “regulars.” And once they do feel like regulars, they will be the people sitting up at the bar laughing uproariously at nothing, just to show what a good time it is to know the owner.

Of course this raucous enthusiasm comes at a price, and these owner-knowing San Franciscans will want at least part of their bill to be comped by the owner, not so much because they can’t afford that glass of Zin, but because it shows that the owner is acknowledging that they are special.

This is especially important if the San Franciscan has out of town guests with them, in which case they will probably spend the whole meal praying for part of the bill to be comped. If for whatever reason, it isn’t they sometimes resort to the “ghost comp” to save face. They’ll look at the bill, nod appreciatively and then just walk out.

Of course they’ll never be able to go back, but it’s usually worth it for the look of total admiration on the faces of their guests, and pretty much everyone else in the establishment including sometimes, even, the owner.