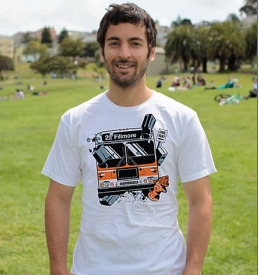 Reader Lisa tipped us off to this t-shirt from local company Headline Shirts, noting that last night’s Muni wreck was their shirt, come to life.

OMG NOSTRADAMUS 2012 THE FUCK. I had to get to the bottom of this, so I called Headline Shirts’ creative director (and designer of the shirt) Jake Ginsky to get this week’s lottery numbers.

So, how old were you when you realized had psychic abilities?

(laughs, because I am hilarious!) It was more or less inevitable, wasn’t it? After four years commuting on Muni I knew that would happen sooner or later. It’s not terribly surprising.

When did you guys start selling these shirts?

About 18 months ago, for a line we did called “local coverage”

(Note: at the time of our interview, the shirts we no longer available for sale) Have you guys considered reissuing the shirts, in light of last night’s accident?

That’s not a bad idea. Yeah (consults with someone else in the room) we could start printing them today.

You should! (Note: and then they did! WHY IS JAKE THE ONLY PERSON WHO LISTENS TO ME)

I guess there’s a demand for it. As much as people like to hate or talk bad about Muni, it gives people a tribal bond of shared misery.

You want your own shirt to commemorate the Great Muni Shower of aught-ten? Go for it, they’re $19 bucks. (I’m a lady’s medium, just FYI)